In Honor of... Women's Sphere & the Right to Vote

Greetings! This Carol Baxter, wishing you Happy 4th of July if you live in the US and an equally happy Wednesday to those of you who do not!

The theme StencilGirl® gave the Creative Team for July is In Honor of...

After thinking about some obvious choices such as people personally important to me, and in light of the Independence Day holiday in the US, I began noodling around the internet for a group that said, "I accomplished ______ . Pick me." Hence: 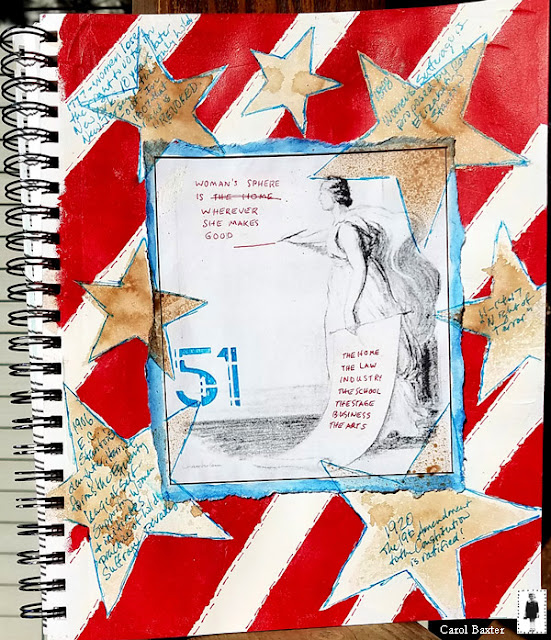 I became lost for a an hour or so in Suffragette Movement cartoons (mostly anti, some pro) from a century ago. Sobering. Outrageous. Powerful. And the timeline! Thought provoking.

The cartoon in the center of my art journal page is a 1917 cartoon by, enlightened human being, Kenneth Russel Chamberlain.

On the wall it reads: "Woman's sphere is ("the home" is crossed out) wherever she makes good ____"

Scroll:
The Home
The Law
Industry
The School
The Stage
Business
The Arts

I made note of a few dates on my art journal page:

1777 women lose the right to vote in New York. A decade later, New Jersey is the only state holding out. In 1807 that right is revoked.

1906 Stanton's daughter, Harriet, forms the Equality League of Self Supporting Women and initiates the practice of holding suffragette parades.

1920 The 19th Amendment to the US Constitution is ratified giving women the right to vote.

The meaning of 51 is dual - Women make up nearly 51% of the world's population. Coincidentally, it happens to be my age. 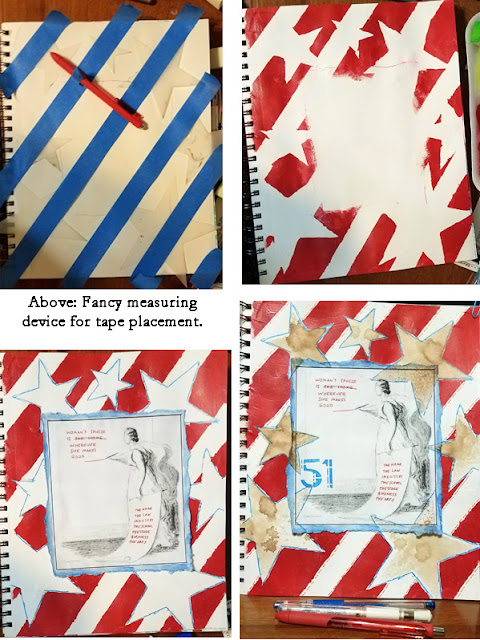 Finish outlining stars in blue, and write in a few facts...

I hope whoever you are, where ever you reside, whatever art mediums and styles become you, you are enjoying the benefits of freedom this day!

It's almost time!!!
Subscribe to our Scoop so you don't miss the saving code!