The Creature’s Foot: A Pre-Halloween Tale

There is a cabin in the woods. . .it houses secrets that even the trees shudder to hear. Far beyond the road, the birds twitter aimlessly, not knowing how to move about or where to go. The creature is said to have flown in on its own foot. Dark. Long. Smooth. It could be said that the foot was hewn from bamboo. Perhaps, Canadian Maple. It may never be known. What is known is that the creature pays an homage to it at October’s tail, as though the end were near, as though ghouls and spirits cackled and called to each other in glee. It was the Feast of Bones, the night of flying, and that is exactly what the creature did. . . IT FLEW! To the heights. To the stars. Across the moon. Above and between the pines, shredding their tips, ripping their boughs. And the creature’s visage shone upon the shuddering landscape! Are you creature enough to make your own? Then follow the bats’ direction. They go where the bones are buried deep.

What you must conjure up:

How to stir the pot:

Gesso both sides of the skateboard deck. Paint both sides white. Splatter black paint on the design side. 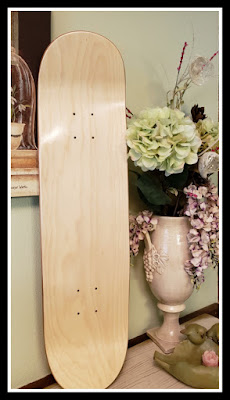 Draw an oval on a piece of paper and trace it in the middle of the bottom side of the skateboard. (The points of the deck should be face down.) Paint the interior of the oval nickel grey or a dark color of your choice. Using an embossing pen, outline the oval without being too particular about staying true to the oval form. Emboss with Ranger Holographic Embossing Powder.

Using light molding/modeling paste, or joint compound, stencil the circle with the head, ribcage, and hip bones stencil using Sticks and Bones stencil by Orly Avineri. I also opted to use a Uniball white pen to create dots between the edge of the oval and the edge of the embossed oval.

While that is drying, use heather gray on each end of the deck to give the ends a used and slightly darkened shade. Avoid creating a straight line across. Using a mostly dry brush, paint the ends out so that the edges are jagged. Stencil the non-body stencil from Sticks and Bones stencil by Orly Avineri (at the bottom). Once it is dry, stencil the bat from Rat and Bat stencil by Roxanne Coble onto the edge of each end of the deck where the non-bones stencil ends. Use the embossing pen to trace the bat bones from Rat and Bat onto the bat and emboss using glossy black embossing powder. I did not include the legs but you should include them if you desire. 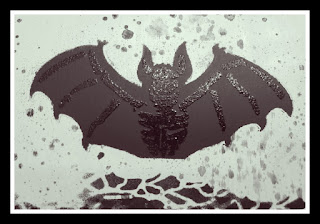 Using Splats, Blooms, and Bones stencil by Orly Avineri, stencil the drips and splats. I used royal red for the drips and black for the splats. Stencil the blooms from Splats, Blooms, and Bones on the oval using the embossing pen and emboss with red embossing powder. With a dry brush, gently dip the brush into the violet green paint and whisk across the skeleton to give it a green tinge. Paint the other side of the deck black and be sure to edge the deck in black, as well.

As a final step, you have two options:

Option #1: If you only intend to hang the skateboard, you can purchase gloss polyacrylic spray from your local hardware store and seal the paint on both sides. You can then purchase a skateboard wall mount (there are many inexpensive versions) and simply hang the art on the wall.
Option #2: If you plan to use the skateboard or give it to someone who will use it, you will want to seal the skateboard on the stenciled side using Art Resin or similar products. You will need to purchase skateboard grip tape and apply it, as well as the trucks and wheels.
I’d love to see your creature foot. Share it on the StencilGirl Facebook page and be sure to tag me!


And know this, if your skateboarding leads to toil and troubling, screech out your call, and I will come bubbling.