Get All Your Ducks (or heads) In a Row

When creating a composition with human figures at different distances from the viewer (and each other) it's helpful to understand something about perspective and how we see.  When we look toward the distance, the invisible line between our eyes and the horizon is our eye level.   Because most adults fall within a general range of height,  the eyes of a person standing in front of you will line up more or less with the horizon at your eye level, too.  Even if that person stands twenty feet away from you, if the ground is level, you will still be at the same eye level, and that person's eyes will still roughly line up with the horizon - even though their figure now appears to be smaller.  The same holds true if the person is fifty feet away from you and appears even smaller still.  On level ground, the sight lines of people at different distances from the viewer fall along the same horizontal line.  As perspective shrinks them, they shrink from top and bottom, anchored on the horizon at their eye level.  In composition, we naturally tend to identify with the most prominent face and adopt their sight line, meaning that other people in the composition on that same sight line are presumed to be the same stature as the viewer.  It's a brain thing!

In the first example, the horizon runs along the tops of these figures' ears. and because the second figure is smaller but on the same line, it appears to be the same height as the one on the left, but farther away from the viewer.  In the next example, putting the second figure lower than the horizon (established by the larger, closer figure) has the effect of making that second figure smaller in stature, like a child.  Both compositions use the same masks, but the effect is different from one to the other.  The second example could conceivably be showing a same-sized figure that is farther back and lower down (going down a slope, for example),  but taking the second figure off the horizon creates different visual information.  In the absence of other elements establishing a horizon line, we are more likely to identify with the closer (larger) figure,  and we the automatically assume the smaller figure is smaller than we are.  It would work in reverse if the smaller figure aligned with the horizon (established by other visual information in the composition) and the larger figure were much higher - it would make the larger figure appear to be monumental. 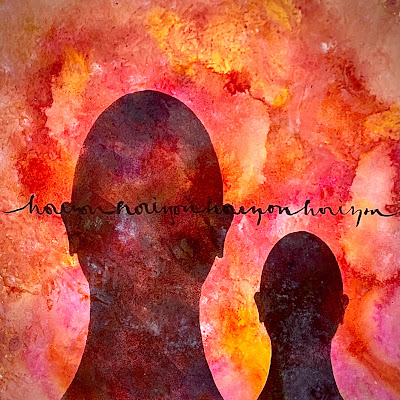 Here are two more quick examples to illustrate this principle. (Ordinarily I would make these pages much more finished, but they are illustrations only, not completed art journal spreads.)  In the second one you can see I had to sketch in tiny figures in the far distance, but still, their heads are lined up with the ones closer to the viewer.  It thus creates the illusion of a crowd of people all of the same size, with their heads all on the same horizon.  If their feet were all on the same line it would look like a collection of Gullivers and Lilliputians.

In September I had the great pleasure of traveling with MaryBeth Shaw, owner of StencilGirl® Products, on a traveling art workshop in northern Italy.  Our project was to create an accordion-fold painted travel journal, adding bits and pieces of ephemera as we wandered from Padua to Venice to Parma to Bellagio.  I took a number of stencils and masks that have the same figures in different sizes, and had fun arranging them in my travel journal.  Because of the pandemic, cities that are normally mobbed with tourists were relatively uncrowded.  We had a wonderful time strolling through near-empty piazzas, through colonnades, down narrow passages, over bridges, on trams, in boats, on trains, in cable cars, and on foot.  (Trust me, if you have the chance to take a travel art workshop with MaryBeth, you should do it!)
On this side of the journal I used the principle I am featuring in this column. I used stencils and masks of figures by Carolyn Dube, and kept their heads on roughly the same line across the pages of the journal in order to create the illusion of depth.  I even suggested a horizon line with a line of black dots running from figure to figure.  (Notice that in the photo of the Venetian canal in the second panel I misaligned the horizon - raising that image up half an inch would have done a better job of emphasizing the same horizon line from panel to panel.  What can I say? Creating on the fly doesn't always leave you time to think carefully before pressing down a photo sticker!) 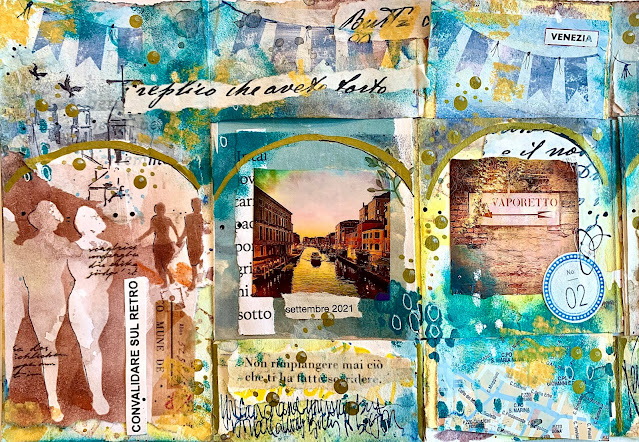 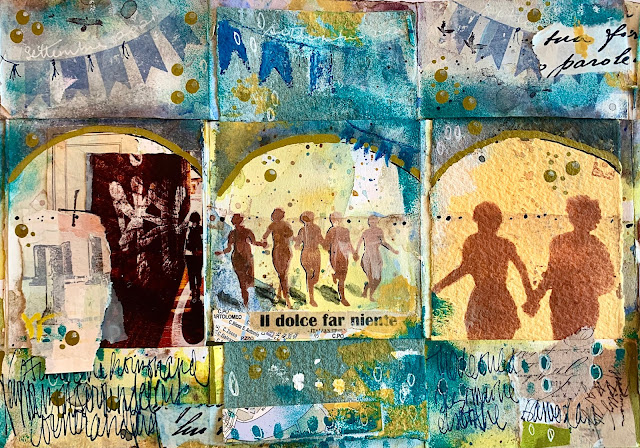 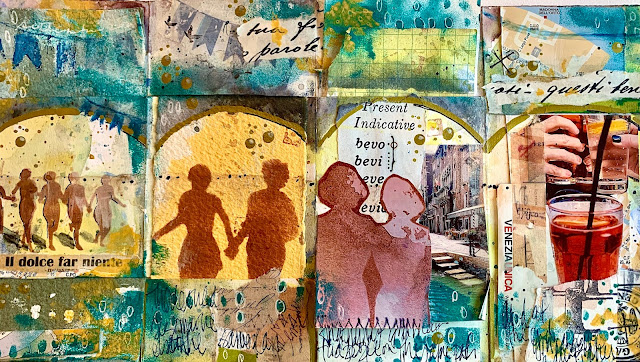 This composition may possibly give the impression that we were all running to the last panel in order to clink glasses with our aperitivos - and that impression would not be entirely misleading!  I used a plethora of stencils and masks on this project, as well as some rubber stamping and some mark-making tools.  We are fortunate to have stencil and mask designs that come in multiple sizes - it makes creating a composition like this a lot of fun.  If you have a few figure stencils in different sizes, experiment with placement and see what you come up with.  Ciao!