After playing the same cello for more than twelve years, my now adult daughter, Candice, needed a new one. We found one that she loved, and she tossed the old one to the side. Well, it wasn’t so much a toss aside as it was a free-for-all-grab by her mother. Ever the scavenger for possible art material, I snatched it right up! This old cello, well-loved and well-played, was really a member of the family and needed a bit of dressing up. I envisioned a cello remade into a work of art that was gentle but glitzy, with a semblance of old-world decadence to it. It would require some gold and a bit of sparkle while leaving room for the kind of dreamlike wandering we artists love to do. I set to the task, always mindful that the cello required respect and honor for the years that it had been loved by my daughter and had loved my daughter back with its sonorous moan.
The process of creating this cello was long because I wanted to honor the relationship between it and my daughter, and to celebrate the memory of the wonderful music that came from it whenever Candice would hide away in her room for hours just so she could retreat into her musical world, or to challenge her sister, Daphne, to a musical playoff—Candice on her cello in her room and Daphne on her violin in the next room. Those are some of my fondest memories. They are memories that I wanted to make immortal, so I set out to create a cello redux that would honor that.
I began by washing the cello down with a wet rag to remove any residual dirt or oils then took a fine grit piece of sandpaper and lightly sanded it so that the gesso layer would hold more tightly to the piece. After applying a first layer of gesso using Liquitex white gesso, I found that I needed to add another layer to make it (mostly) white. I didn’t want a solid layer of white. I wanted some striations, but it did need a bit more coverage, so I purchased Krylon spray gesso and covered it again. My next step was to paint the back and the sides of the cello a soft turquoise to mimic the ocean.
Deciding upon which stencils to use was easy as StencilGirl ® Products has a robust selection of ocean and water stencils. I chose some of my favorite ones: Mermaid Stencil and Masks (L527), Coral Reef Stencil (L353), Majestic Sea Turtles Stencil (L355), Starfish Stencil (L187), while adding the Crowns and Scepters (L545) stencil. I applied light modeling paste to create texture and depth to the piece. I initially had decided to use wax on the stenciled areas, but previous tests revealed that the waxes wouldn’t accomplish my goal. I remembered that I had a significant set of Finnabair’s Sparks Acrylic and Metallique Acrylic Paints in my arsenal. Wow, did they really perform!
It took a while to paint the individual peaks that made up most of the stenciled areas. When I was done, I created a gilded edge on the front side then sprayed the entire cello with Krylon Glitter Shimmer in Glistening Gold. What sparkle! The next step was to add faux strings using rhinestone cup chain. My next task was to prepare the bow, which took no time at all. A little gesso, some Brushed Nickel Satin by Krylon, and voila!—a beautifully decadent cello. Although this incarnation won’t provide the angelic tones it used to, it will live on as a memory of a brief moment of time when it provided such wondrous music.


Rather than offer a series of photos, I thought that you might enjoy this video. 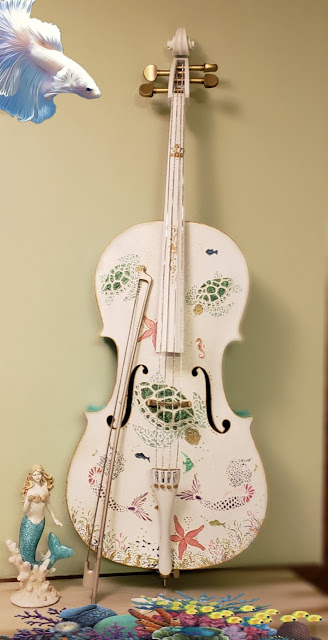