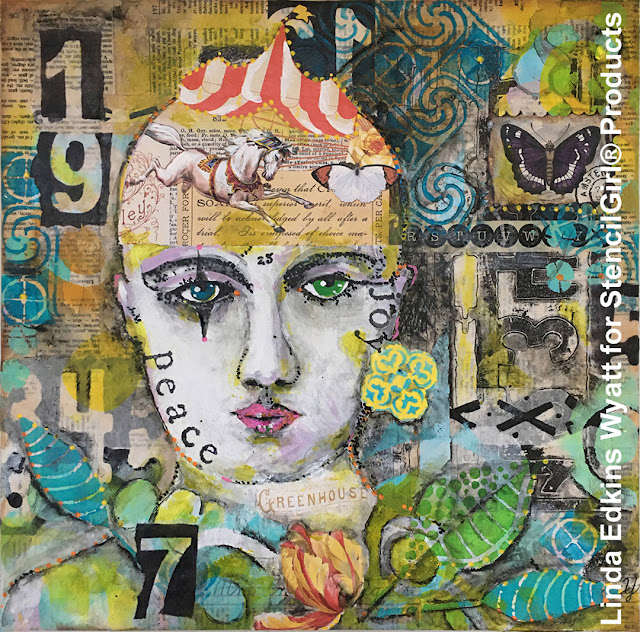 Hi everyone! Linda Edkins Wyatt here, with a project that I really, really love, inspired by artist Kim Collister.

Were you thinking, like I was, "What the heck is a pastiche?" It sounded like a portion of pasta, or maybe a dish with both pasta and pistachios (wouldn't that be yummy?) But, it's a 25 cent word for tribute, or honor.

In my mind, in my journal, and in my research, I tried about a dozen artists whose work I love and admire. I kept coming back to Kim, who I have been following for years. She's whimsical, colorful, introspective, creative, and fearless. Her recent series of faces using a vintage phrenology head really captivated me, so I decided to do something similar. I was a little worried about being too much of a clone or copy cat, but the end result, I think, combines both our styles without infringing on Kim's originality.

In addition to the detailed tutorial below, I made a video of my process. 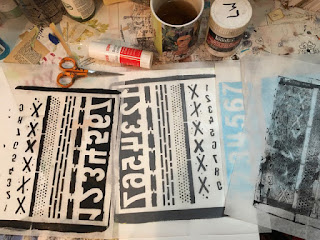 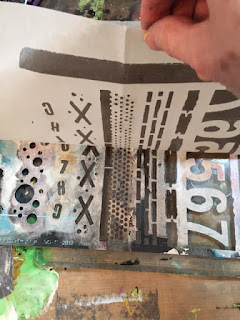 I started with a 12" x 12" canvas, my gel plate, deli paper, and of course, acrylic paints. I made a bunch of prints using an assortment of stencils. Of the many prints, I liked the ones with the large design from Seth Apter's Borderlines December 2017 club set the best.

I cut and tore the section I liked best and set them aside. 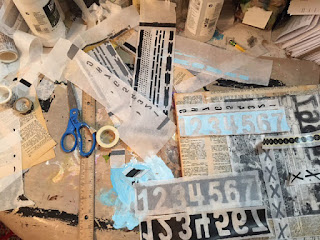 Next, using matte medium, I covered the canvas with pages from an old book and some washi tape with numbers and letters. 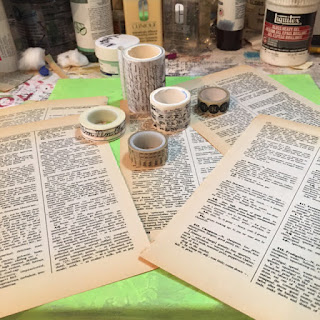 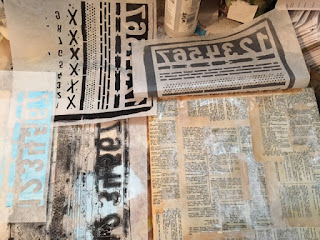 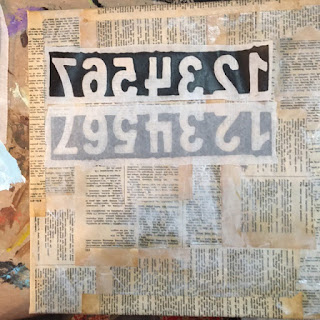 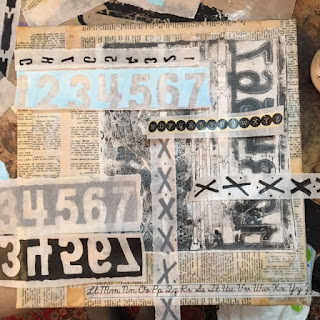 On top of the book pages, I arranged the printed pieces of the large Borderlines stencil to my liking then adhered them with matte medium. It had a nice typography look, but I knew it needed more.

I searched The Graphics Fairy for vintage images of a phrenology head, found one I liked, and printed it on good 8.5" x 11" paper with my laser printer. (I didn't want the ink to bleed, so I went with a black laser print rather than a color print from my inkjet printer.) 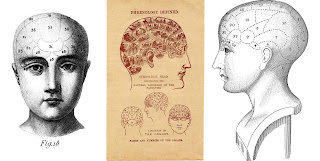 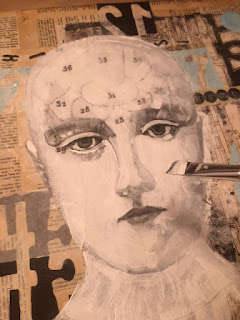 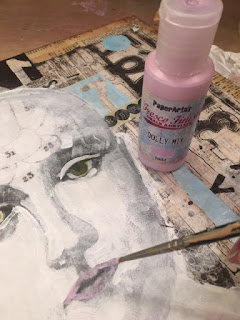 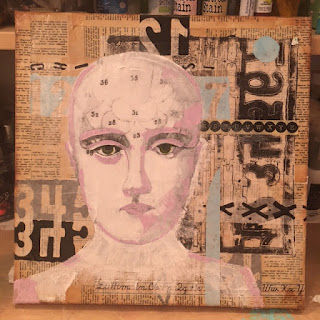 After positioning the head where I wanted it, and drawing in lines for the neck and shoulders, I added white acrylic and some pink paint as well. Then the real fun began. 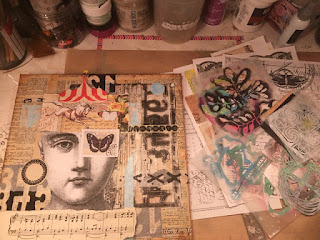 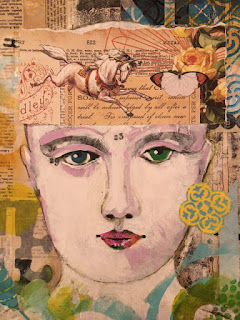 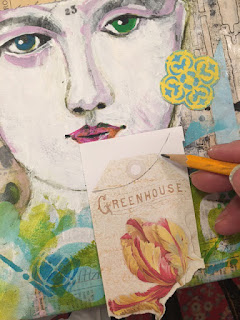 I rummaged through my papers looking for collage elements that I liked, and that was similar to what Kim would have used. After much puttering and switching elements in and out, I added a butterfly, a circus horse under a tent, and a botanical tulip. The "earring" is a small image from Gwen Lafluer's Afraid to Try stencil, done with turquoise paint on yellow cardstock. 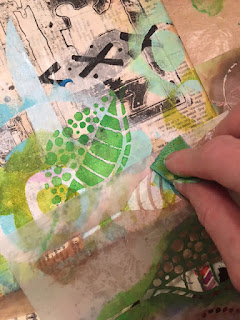 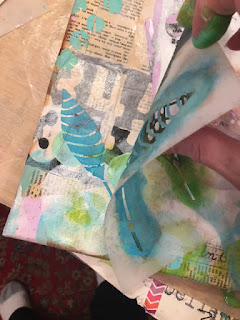 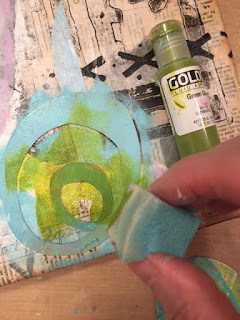 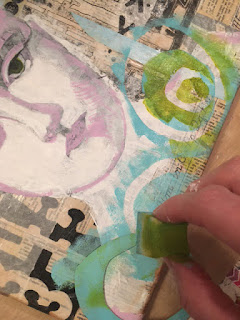 The tulip needed leaves, so I stenciled some in using the StencilClub March 2013 set.  I thought circles would add to the circus feel, so I used the irregular circles from Carolyn Dube's August 2018 StencilClub Playtime set, randomly stenciling them around the canvas. 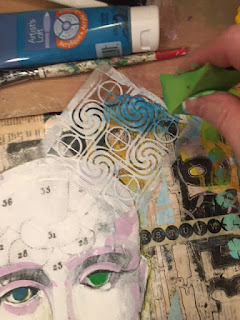 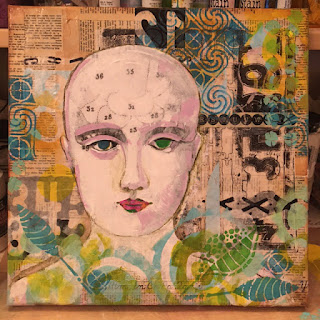 I also added the small stencil from Tina Walker's October 2020 Vintage Wallpaper set, which felt like pinwheels and added some more whimsy to the canvas.

I added the words PEACE and JOY on the face with stamps, printed on thin tissue paper, and glued to the canvas. I also darkened some of the blacks and whitened the white areas. The last touches were adding depth with a black Aquarellable Stabilo pencil, a black sharpie, and some dots with Posca paint pens. 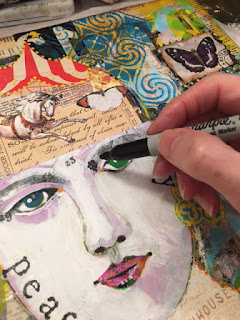 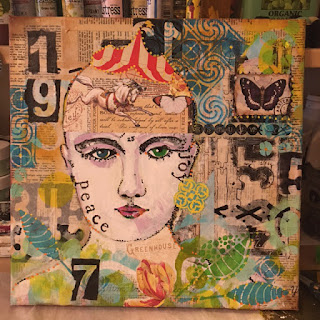 Here are some detail shots. I love the way the leaf stencils work with the botanical tulip, and the random numbers from the original phrenology image peeking through. The imperfect circles and pinwheels interact nicely. 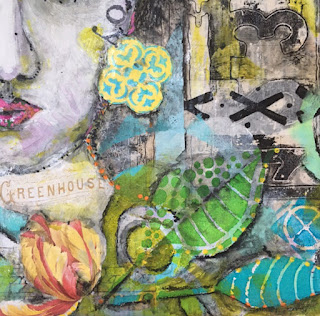 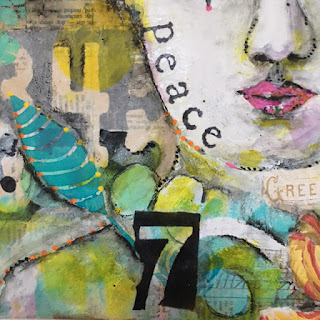 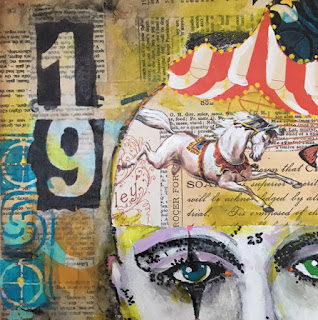 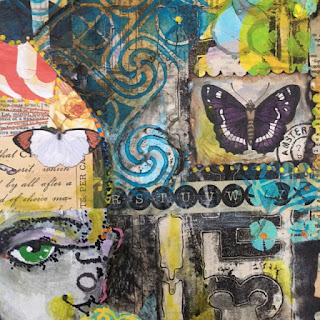 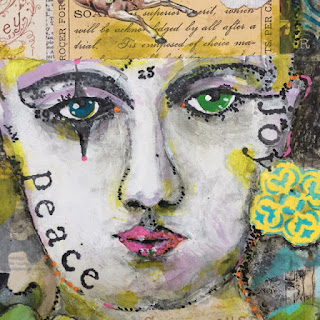 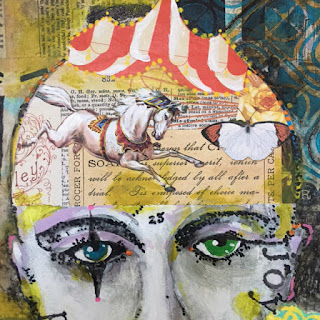