The month of April you'll be seeing posts from our fabulous Creative Team members who were given the theme STENCILED POETRY.

I suspect my interpretation is somewhat more literal than theirs will be. I made a large art journal spread based on a poem that never fails to make me smile, The Country by Billy Collins, one-time United State Poet Laureate. You can find it in the books Nine Horses: Poem or Aimless Love: New and Selected Poems.

An immediate diorama popped into my head the moment I read this poem. 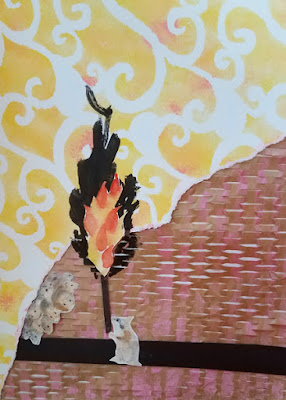 Simply put, it's about individual logic and a sleepless night caused by a tiny "druid".
Moral: cap the matches so a mouse does not light your house up.

According to Collins, a poem should "stand on its own" but, being fond of comics, he allowed a few of his poems to be animated for his Ted Talk (The Country starts at the 8:28 point).

"When you get a poem on the radio, a billboard, you don't have time to deploy your anti-poetry deflector shields that were instilled in high school," Collins said during his Ted Talk.

I grew up listening to my Popa read poetry and my art journal spread is in the spirit of sharing my enjoyment of the distillation of words into poetry. 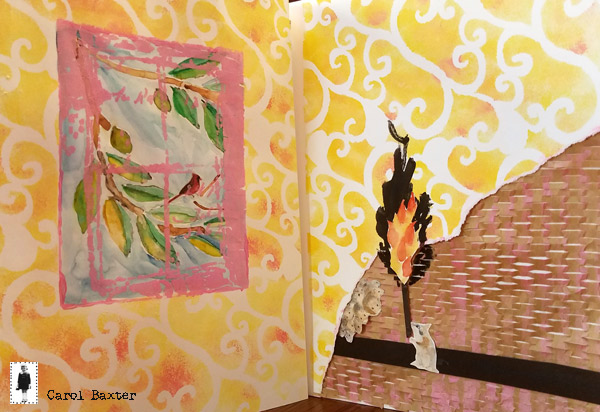 "When you get a poem on the radio, a billboard, you don't have time to deploy your anti-poetry deflector shields that were instilled in high school," Collins said during his Ted Talk.

I hope this month of Stenciled Poetry, allows you to look past your deflector shield, slow down, read a poem, and create a new work of art or three. 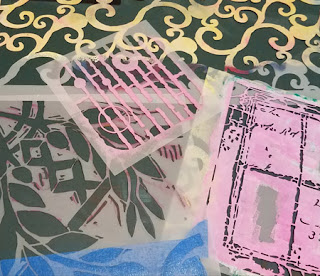 I cut out a piece of paper the size of the window in Window Ledger by Pam Carriker, then aligned that paper with the small stencil from Cuba Libre by Jane LaFazio for StencilClub.

I ignored the "tile" elements of the stencil and painted the leaves with watercolors. 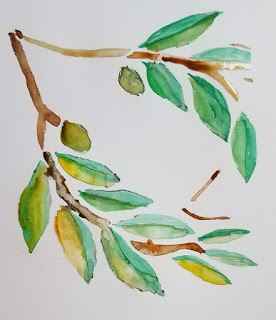 Next, I layered the white paper I had cut over the watercolor, then taped the Window Ledger Stencil down, then over that, the Arabesque by Nathalie Kalbach.

I used acrylics to paint the wallpaper and then I carefully removed the Window Ledger Stencil so I could paint right to the edges of the white paper underneath. 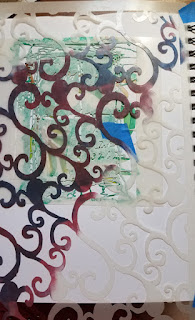 After that, I went back and painted the right side of my journal with Arabesque.
I painted the sky blue with watercolors and added a washi tape cardinal.

The mouse side of the wall was made with free mice pics I resized and printed and painted with watercolors. I tore it, glued it plus corrugated paper from my stash to the page underneath.
I added a bit of pink with the mini stencil from the Borderlines set Seth Apter designed for StencilClub to the corrugated paper to create "insulation".

I painted the flames but the Cascading Feathers Stencil by Jessica Sporn would have come in handy! 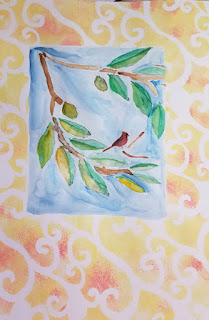 At that point, I felt like I'd brought the outside into my journal.

I finished the left side off with the Window Ledger Stencil. A girly house in the country for sure with my color scheme! It's just a little on the painterly side. 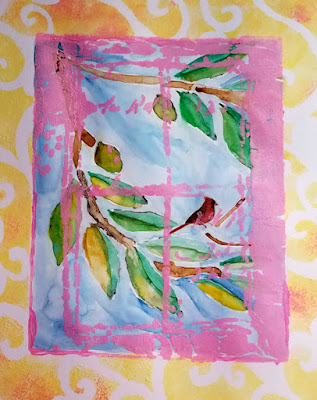 Thanks for letting me share. I can't wait to see what the Creative Team does, can you? 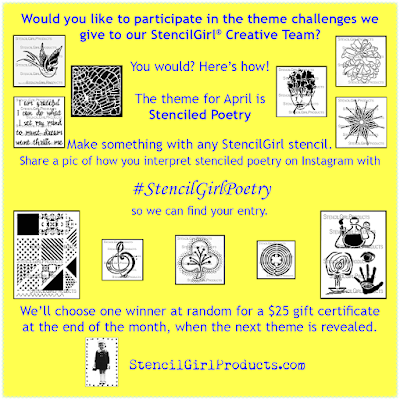