A Painted and Stenciled Tribute to Tennyson by Linda Edkins Wyatt 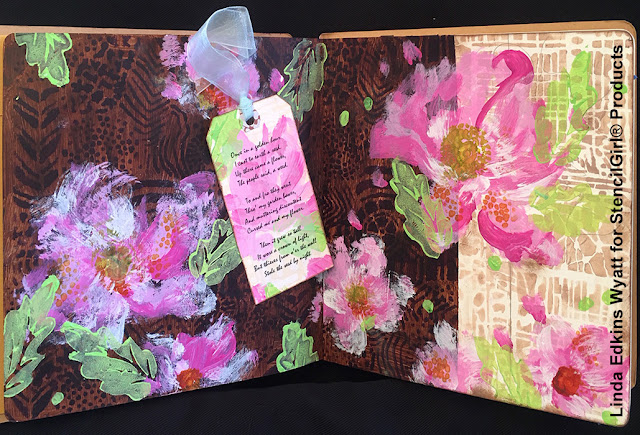 Hi, Linda here with a journal spread that I hope makes you think of warm days and the smell of blooming blossoms! On reading "The Flower," a work from Victorian poet Alfred Lord Tennyson, I pictured roses in full bloom, spilling over a garden wall, their scent filling the summer air and their petals falling softly to the ground. I had just purchased a new Dylusions square art journal, and I thought a beautiful, painterly spread would be the perfect way to christen it.


For the design and colors, I was inspired by--of all things--a shopping bag! I had purchased some gifts for my daughter at our local Loft store and saved the gorgeous paper bag. (Naturally, I filled the bag with art supplies and unfinished projects!) The bag had pink flowers on a background that changed from dark brown in the front and back to white on the sides. It really spoke to my inner textile designer. I decided to try and capture that idea in my journal spread.
I started by penciling off the areas that would be dark and light. I also penciled in an area where I wanted to have the Tennyson poem on a tag. I taped the line separating the brown from the white with removable blue painter's tape. 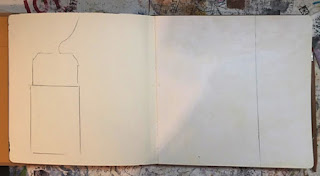 First, I painted the brown background. It was pretty boring and streaky so I added an Aboriginal stencil over it and sponged on dark purple paint. 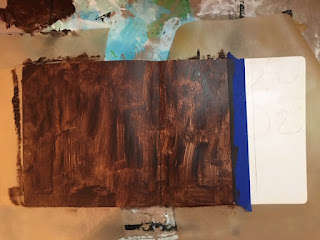 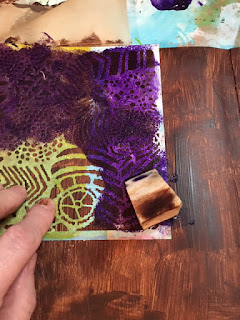 I removed the blue tape, then placed it over about an inch to the left to work on the right side of the page. On the white section, I used Nested Squares Full by Carol Wiebe and sponged on light tan paint. (I mixed it using white with a dab of the same brown that I had used on the left.) 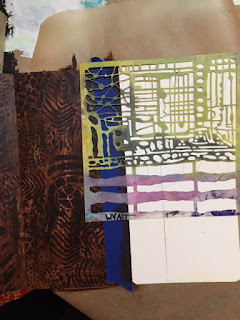 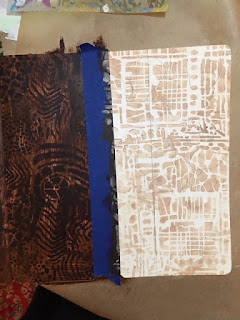 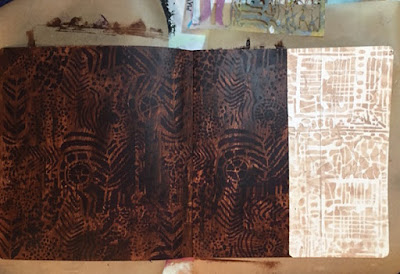 I removed the blue tape and had a nice clean line separating the dark and light sides. For the flowers, I wanted an impressionistic, painterly style. On my Teflon mat, I squeezed out blobs of magenta and white acrylic and mixed several shades of pink. 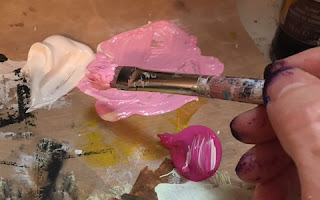 I started by painting light pink flowers on white watercolor paper and had an idea of cutting the flowers and gluing them to the journal. But...I was having so much fun painting that I threw caution to the wind and painted right on top of the stenciled backgrounds. It was one of those scary/exciting moments because I wasn't sure how the flowers would turn out...I was channeling my inner Monet...and fortunately, my painting found the balance between loosely relaxed and sloppy! If I had painted the flowers and cut them out, the overall look wouldn't have been as free and impressionistic. 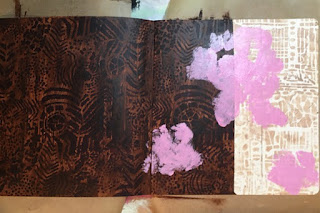 The flowers needed a center, so I used a dab of Golden Green Gold and Golden Quinacridone/Nickel Azo Gold fluid acrylics through a circular area of the medium Aboriginal stencil. It gave the flowers just the punch they needed. 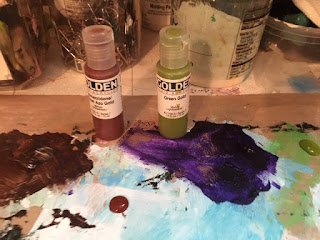 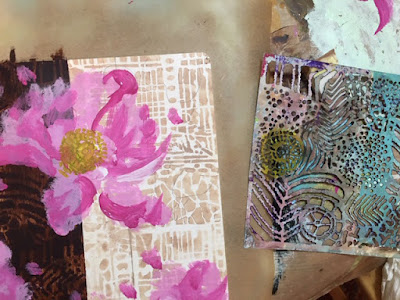 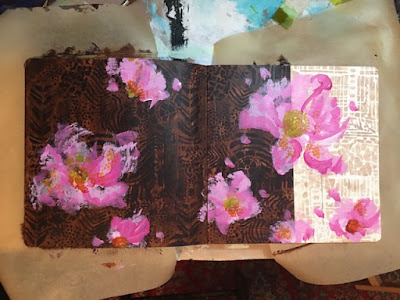 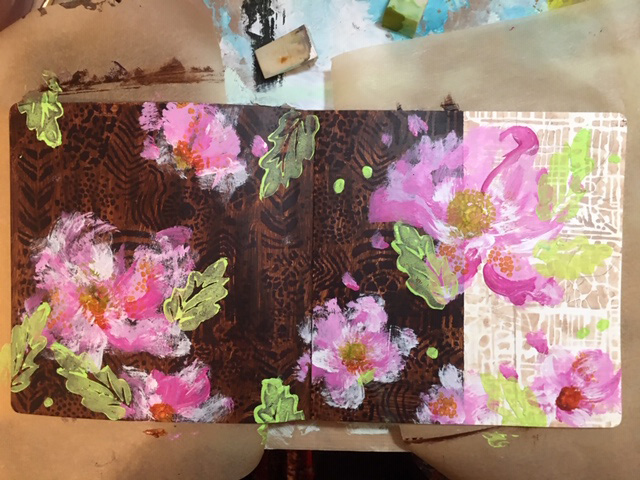 For the leaves, I used two Art Foamies leaf stamps with Liquitex Basics Brilliant Yellow Green acrylic paint. I also put some dots of green and pink here and there to add movement and color and make it feel like there were petals falling. 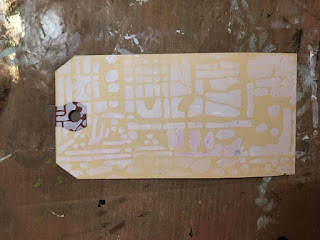 Next, I worked on the tag. It was cream-colored, so I again used the Nested Squares Full stencil, but this time with white acrylic. When it was dry, I painted some loose pink flowers in the same style as the journal spread and added a couple sponged leaves. 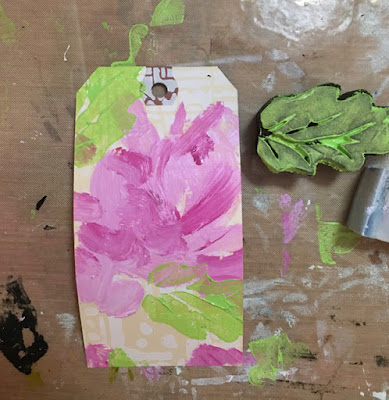 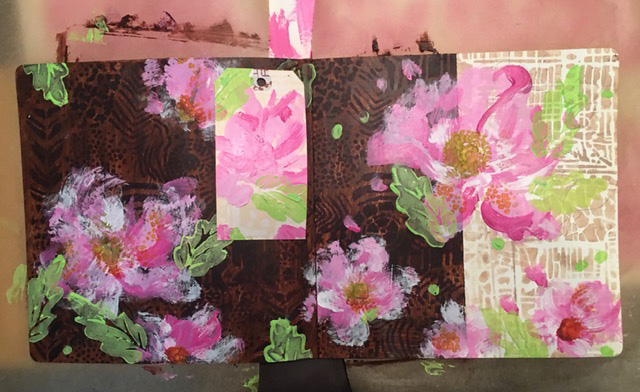 I wanted the poem on the tag, so I measured the "live area" of the tag to be sure the words wouldn't bump the edges. On my computer, I used Microsoft Publisher to create some textboxes that would be tag-sized, then flowed the poem into the space. I made one rectangle in small print with the whole poem, and one in a fancier font with the first three stanzas.

Next, I printed the words out on an Avery clear mailing label. I carefully trimmed the sections, peeled away the backing, and applied it to the tag, then pressed it carefully so it would "melt" into the background. The fancy font poetry went on the painted side of the tag, and the small, full poem on the back. 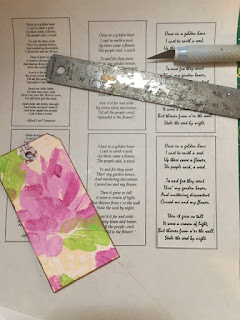 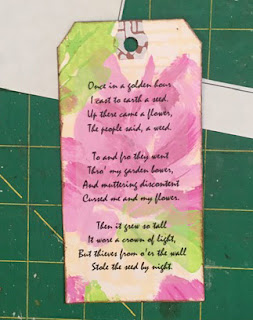 I decided to have the tag attached with a sheer ribbon and pink brad at the top of the page. My original idea was to make a pocket on the left side, but I didn't want to cover up the pretty flower that I had painted on the left. By having the tag attached with ribbon and a brad, it makes all the flowers visible and allows the tag to float on the page. There is enough ribbon attached to the tag that I can use it in the future as a bookmark or placeholder for other journal pages. 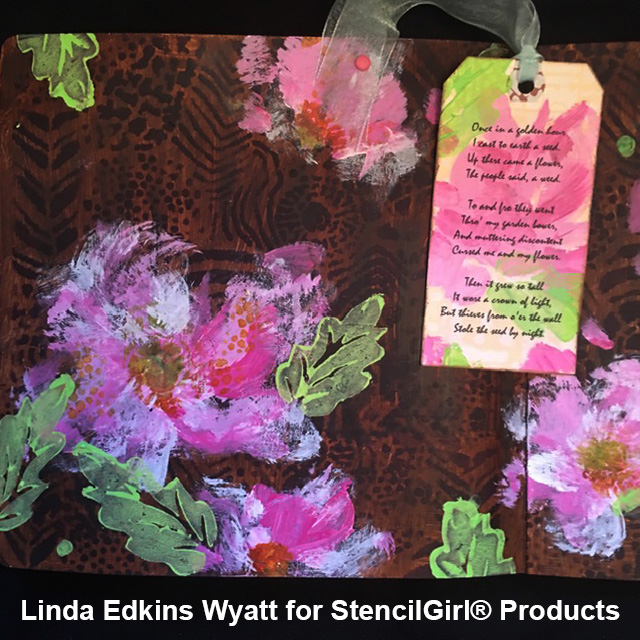 Here's the whole poem by Alfred Lord Tennyson that inspired my journal spread:


Once in a golden hour
I cast to earth a seed.
Up there came a flower,
The people said, a weed.
To and fro they went
Thro' my garden bower,
And muttering discontent
Cursed me and my flower.
Then it grew so tall
It wore a crown of light,
But thieves from o'er the wall
Stole the seed by night.
Sow'd it far and wide
By every town and tower,
Till all the people cried,
'Splendid is the flower! '
Read my little fable:
He that runs may read.
Most can raise the flowers now,
For all have got the seed.
And some are pretty enough,
And some are poor indeed;
And now again the people
Call it but a weed.