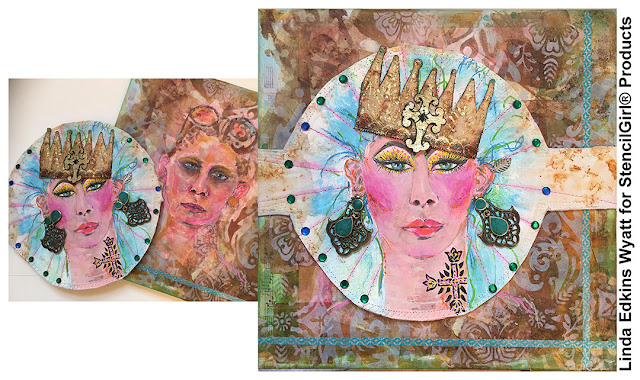 Hi! Linda Edkins Wyatt here, with my interpretation of StencilGirl's mask theme. I thought long and hard about what kind of mask to make: a Halloween or Mardi Gras festive mask, a Tragedy & Comedy mask, or maybe a medical mask, since I spent the last 10 months wearing a medical mask daily for my job in a New York City public hospital.
But, as I was paying the cashier at my local drugstore, I saw a poster of an eye makeup ad that was really bold and unconventional. It got me thinking about how we use makeup, hairdos, tattoos, clothing, and jewelry as part of the mask, we put on daily to present ourselves to the world. Some people go with a natural look, using makeup to enhance their good features and minimize the imperfections. Others take things a few steps further, with extreme eye makeup, striking tattoos, and elaborate hairstyles.

I thought back to an oil self-portrait that I had painted years ago, around 2005, when I was having some serious health issues. I looked sullen and unhappy and painted myself exactly the way I felt. I had been taking a medication that had the side-effect of being unable to sleep without a sleep-inducing medications. I was frustrated and bone-weary. It was a vicious cycle of exhaustion and anxiety. Fortunately, I had photographed the painting, so for this project, I printed two copies of the painting from my inkjet printer, using one for the canvas and saving one for the mask.

I took an unfinished 12"x12" canvas that hadn't turned out the way I envisioned, and glued one portrait on top using matte medium. I added recycled, empty teabags to join the printout to the canvas, then stenciled until it merged  and I could no longer tell where the printout ended and the canvas began.

My idea was to create a removable mask for the portrait: a tough but pretty mask. So, with the second self-portrait printout, I again used matte medium, but this time adhered it to a piece of rusted fabric. I used flesh-toned paint the way you would use a makeup base, and pinks (the way you would use blush and lipstick). The eye makeup was inspired by one of the makeup ads I saw in the drugstore.

Once I had the face and hair painted, I used a plate to draw a circular shape and added extensions at the side to attach the mask to the canvas. 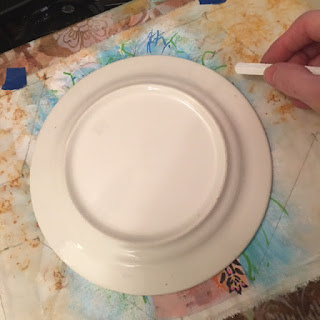 I pinned the painted rusty fabric, along with some felt padding and a purple batik backing, and cut the circle, leaving strips at the sides to attach the mask to the canvas. 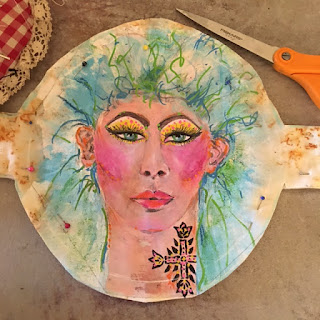 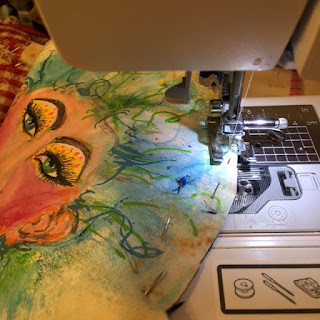 I lightly quilted the mask and stitched the edges closed, adding pink chalk lines and pink stitching radiating out from the face.

A few spots of Velcro on the side of the canvas and on the mask tabs made it easy to remove and attach. 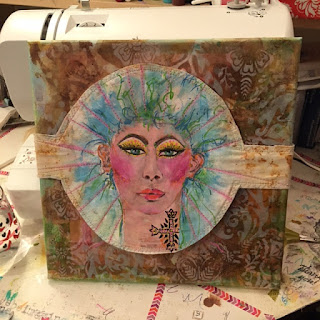 It was pretty bizarre to try outlandish makeup, hairdos, jewelry, and tattoos on myself! I tried various crown ideas, a few different stencils to suggest a neck tattoo, and gave my mask-self wild blue hair. You can see in the photo below that the features on the mask and the canvas under-painting match exactly.

The final touches were adding a crown, made from Gwen Lafluer's Art Deco Borders stencil done with embossing powder on rusted fabric, fake blue and green gems around the edges of the mask circle, earrings of Turkmen Jewelry Parts from Gwen Lafluer's website, a few strips of turquoise washi tape, and a cross atop the crown, formed from a section of Laurie Milka's Pilgrimage to the Renaissance.

Here's a video (with music) on the whole process, start to finish. Enjoy! 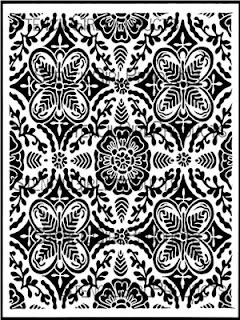 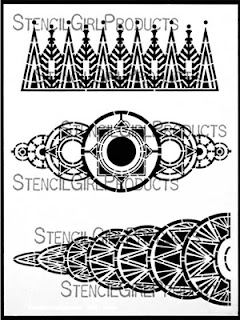 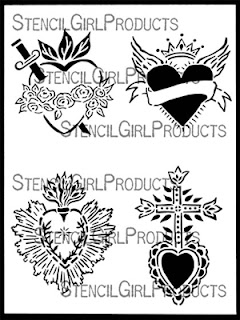 Laurie Milka, Pilgrimage to the Renaissance 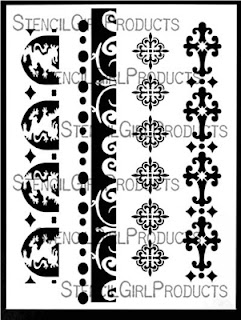 Additional resource:
For the jewelry, I incorporated bits of Turkmen Jewelry Parts from Gwen Lafluer's website
Inks, paints and Posca Pens from The Ink Pad NYC