Ever stenciled a big canvas? A wall? A curtain?

Peer into this post and you’ll find me, Carol Baxter, peering out at you from the front window of my RV. We can see each other because the Baxter home-away-from-home needs a curtain!

Acrylics in hand, this RV Curtain is my first attempt at painting anything larger than 18” x 24” that was not one color of paint on a wall. I am using regular acrylics instead of fabric paint as I am not anticipating a need to wash this curtain much.

I began at my kitchen counter (protected – eek! I nearly forgot this step - with a piece of board to protect it) and a 2 yards long piece of navy cotton duck, conveniently, at 70” x 43” just about the size I needed after sealing the edges with hem tape. I taped down the fabric after noting the vertical center.

Once hung between the cab of our Jamboree and the dining/cooking/sleeping area, much of the bottom right and some of the bottom left won’t be visible so I planned my painting to fade out. My counter space is smaller than my fabric so I’ll be moving and re-taping or rolling the fabric for Layers 2-5. Note that because this fabric was not stretched on a frame it did move and stretch a little.

Next: Gather stencils and lay them out. This was fun, I grabbed more stencils than I thought and ended up with ones (koi) I would not have thought about using had I not sorted through my folders. 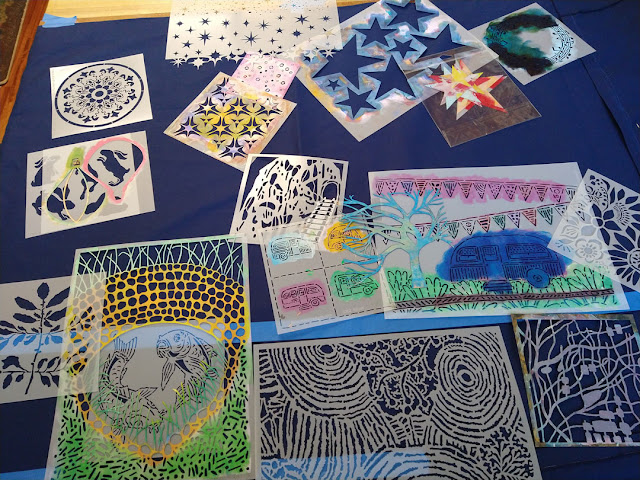 Onto painting the sky! I thought the roller would be great, it was not. The squeegee worked okay. I cleaned up a few linear edges with paint on a sponge.

Area 1: I initially chose navy fabric because I figured the sky would be at least a third of my piece. I painted black and blue then white, blue, and pthalo blue to gradually take my sky from dark to light. I used white to create my mountain using the rock portions of the small stencil from the Caves and Ladders StencilClub set. I also used white to the color in the area where I will eventually park my Vintage Camper Trailer and I needed a couple of trees to hang my flags. 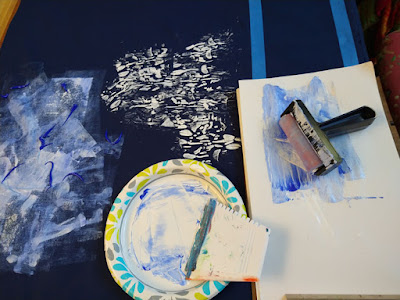 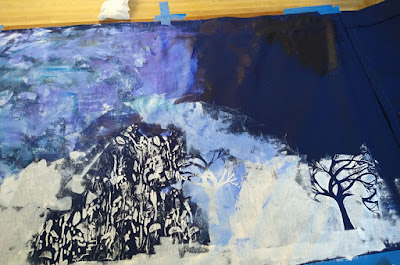 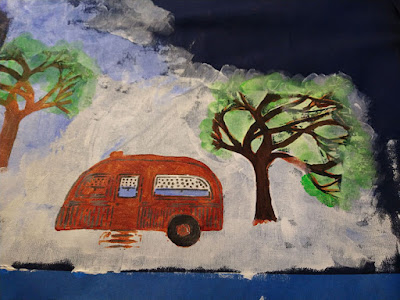 Area 2: I hand-painted in the trunk and arms of the trees that frame my trailer because I had the mask and not the stencil of the small WindsweptTree. Added another couple of layers to my mountain. 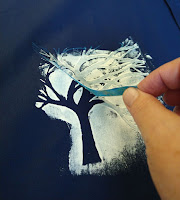 I used Quinacridone Nickel Azo Gold (QNAG) to stencil in the trailer outlines. I filled the trailer in, then once it dried, went back in with black to outline the doors and windows so they have polka dot curtains. At this point, I am not sure what colors I am going to paint the flags and I have another couple of elements I want to add so I am holding off.

Area 3: I completed this layer in two sessions and got excited for the second time when I started layering up the cenote.

First, I painted earthy greens and browns with a river running through it with the large stencil from the Early Art 2 StencilClub Set.

I was originally going to go for a beach scene, but the hubby and I are headed to Bottomless Lakes (cenotes, not really bottomless) in New Mexico for our first RV vacay in a couple of summers and lo and behold, Carol Wiebe designed a cenote for StencilClub back in September 2018 (okay, it might be a well, but I am using it as a cenote) and a cave in the mountainside was part of that set. Meant to be. I mixed a light blue for the water. 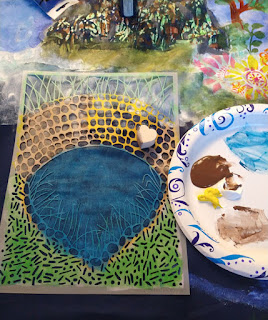 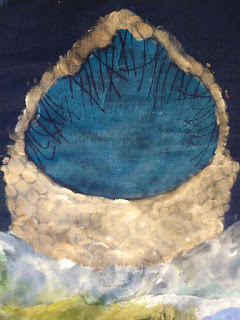 Stenciled in the bricks/rocks around it then went over them with a lighter paint.

Two Chinese Garden Koi swam into the picture. I used yellow to stencil one fish and then added details with black. I detailed the other fish in orange and black. I added the line details back in with QNAG. 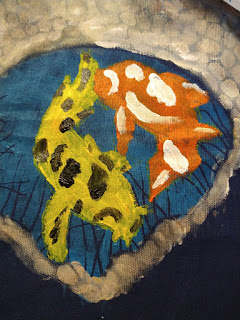 If the fish are that big in Lake Lea, I will truly have a tale to tell when I get home!

I touched up the bricks/rocks and drew in the reeds around the water by dragging a toothpick through green paint. There were little marks around the cenote, so I stenciled in a bunch of flowers and then made some dot flowers with the end of my paintbrush. 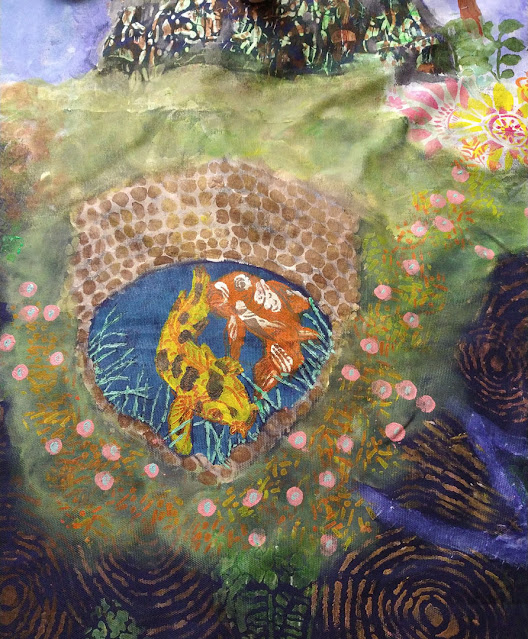 The first time I ever swam in a cenote was near the Mayan Chichen Itzu Ruins. There were a couple hundred steps to get down to it and there were flowering vines hanging down, some to the waterline. The water was clear yet dark and soft. It was gorgeous and an amazing experience. The Cenotes in New Mexico are closer to level with the surface of the land. Cenotes are fed by underground rivers and rivers lead to the sea; facts lead me to the base of my RV curtain.

Rumor has it a Mermaid may be swimming in from the Coast. 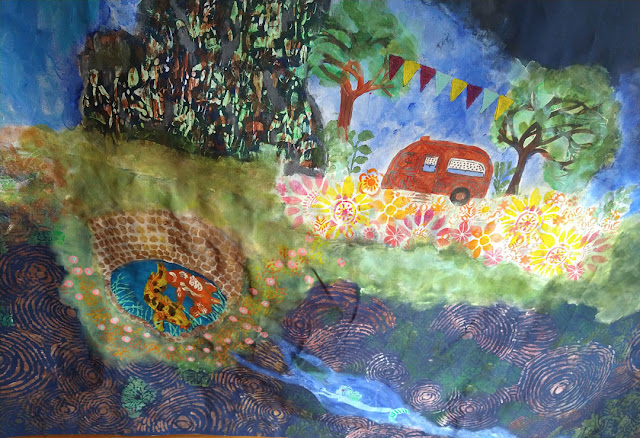 Area 4: Although the curtain will only be up at night, I couldn’t decide between night or day, so I decided to go for both.

Time for scattered starlight. This section was pure fun!

I had previously swiped some back paint where I thought it would look cool as a darker sky. Not so much. The large stencil from Second Star to the Right... StencilClub set to the rescue! I hummed David Bowie tunes and stenciled in a bunch of black stars.

I used gold, silver, rose, and purple paint Soho paints and randomly stenciled in stars with 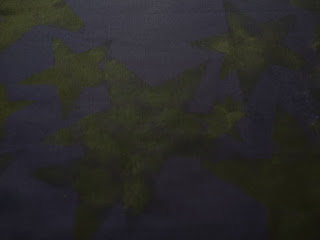 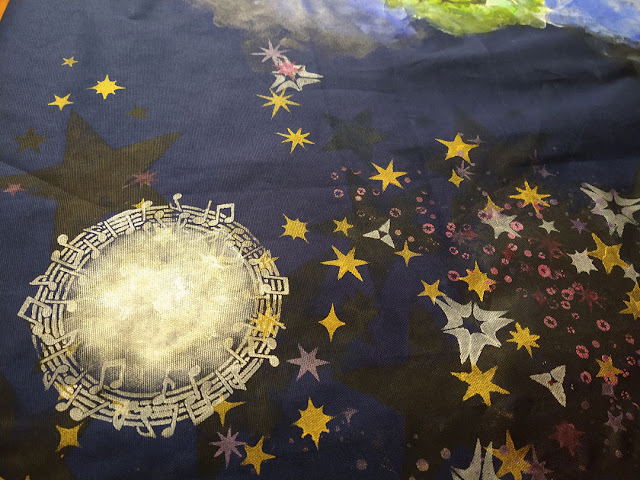 We always have music around the fire at night so my moon glows as a Musical Roundabout in silver.

Area 5: Rose Window is a gorgeous stencil. I stenciled it in yellow and then went back and filled it in with yellow/white/orange. After it dried, I put the stencil back down as close as I could and stenciled it in gold. Subtle but fabulous.

I extended the cloudy sky.

There is a Japanese fairy tale about a rabbit who lives on the moon. I’m sending a Bunny in Motion to the moon via a Hot Air Balloon.

You can see the sun and the bunny in the quick video below.

Hang it: Sticky back Velcro strips (5lb strength). With the a/c on when we are plugged into electric the curtain makes a nice barrier to keep the cool air on us :)

Beats the heck out of the pinned-up sheet it has replaced. With the addition of grommets, I’ve hung my personalized RV curtain. Ray and I will now sleep sound knowing that nobody can see inside.

Touch-ups for later: Front curtain on trailer the trailer and I will probably paint the opposite side of the mountain black.

Although this was an all-day-and-into-the-next-several art project, I might just be hooked on large formats. If you have not tried stenciling something big, I encourage you to try.

For me, totally worth it.

p.s. Have you seen all of the perks of StencilClub? Current members my order past club sets!