Hi everyone, it's Gwen here today to share with you the first monthly installment of Gwen's Gems! I have to say, the title of my new monthly column is a little intimidating for me, but hopefully this will be a little gem of artsy inspiration to start your week!

This month as I was getting ready to attend Art is You Stamford for the first time, I really wanted to come up with a little something I could make so I could participate in the trades, but I was drawing a blank. It sounded like most people were making charms, and that's not something I've done a lot of! But then it came to me... paper beads! Specifically, stenciled paper beads. I thought it would be a fun way to do something handmade that looked a bit fancy, but which was actually fairly quick and easy to make.

I pulled out paper, glue, stencils, paint, and ink, and got to work. I happen to have a lot of beads and jewelry supplies on hand (I'm not kidding when I say that I try everything!) so I was able to do it without buying anything but the clasps. Here's what I came up with: 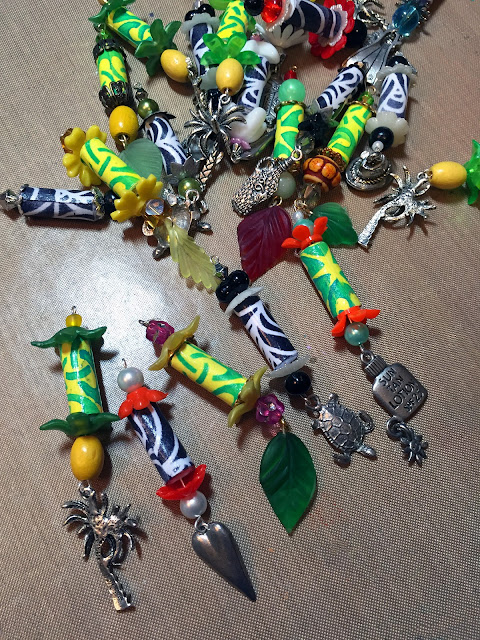 After that, I just added lobster clasps to them and they were ready to go!

For those of you who have never made paper beads and want to learn how to make them, here's how I did it. For my charms, I just made the plain tube-shaped beads.

I started with a few sheets of 32lb white copy paper - sturdier than normal, but thin enough to roll and glue easily. I used either ink and a blending tool or paint to stencil a design about half-way up the sheet (realistically it only needs to be a few inches at the bottom - the rest won't show.) I used the Square Celtic Knots stencil by June Pfaff Daley, and for the black and white ones, I used the Doodle It Tornado Bloom stencil by Maria McGuire. For beads, a stencil that has a relatively small, tight pattern will work best. 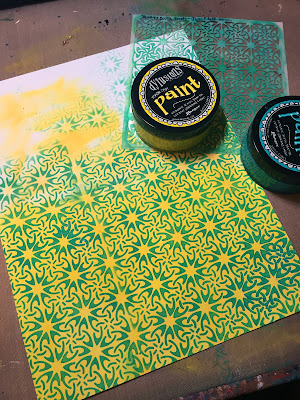 Next, I cut them into 3/4" strips. You can do whatever size you want, and I used the whole 11" length of the paper, but you can shorten that (or go longer!) depending on how thick you want your beads to be.

With the paper in strips, it's time to roll them one by one. I have a little tool that I bought from the lady that taught me to make beads. You could make your own (it's made from a dowel and some kind of pin or clamp, all held together with polymer clay and baked.) You can also use a quilling tool, a toothpick, or anything similar. You just start rolling, keeping the edges even and wrapping it fairly tightly, but not so tight that you can't get it off the tool when you're done rolling. 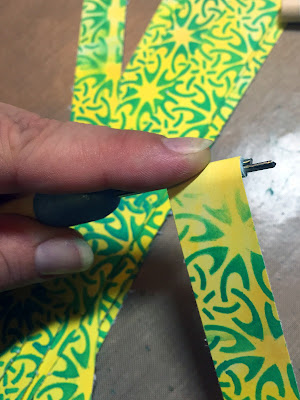 Once you have about 2-3" or so left, stop rolling and apply the glue. I just use a foam brush and plain old Elmer's glue - whatever you have that's similar will work. Gel medium would be fine too. Just apply a thin coat of glue to the part that hasn't been rolled yet, then finish rolling it and carefully pop it off the tool. I smooth the glue with my finger as I finish rolling and seal it across the edge when I'm done. 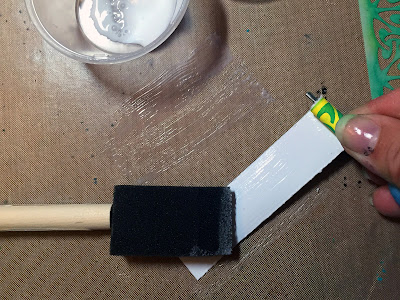 Once it's glued and the edge is sealed, just pop it on a toothpick that's stuck into something to keep it upright, and let it dry. 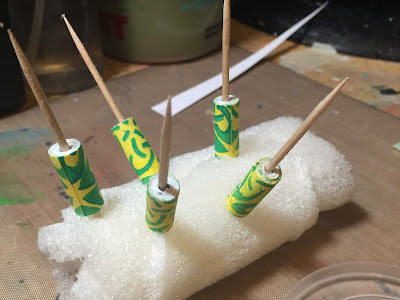 Keep going until you've rolled and glued all your beads. Once the glue is tried, you'll want to seal them so that the dirt and oil from being touched or worn doesn't ruin or pill the paper. I put the bead on a toothpick and hold it with one hand while using a paintbrush and my sealer with the other. Then set them out to dry again. Just make sure you don't paint over the hole in the middle! For mine, I just grabbed polymer medium, but you could use a gel medium, or maybe a resin or something similar. 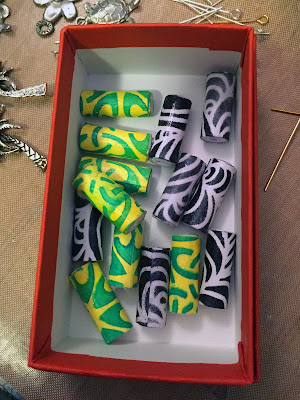 Of course, once my charms were finished I wasn't ready to stop playing! I stenciled another sheet of paper the same way, but this time I cut my strips into long triangles instead of rectangles. You want it to be a very long isosceles triangle - both sides need to be the same angle away from the center. Then you roll it the same way (careful to keep it straight.) 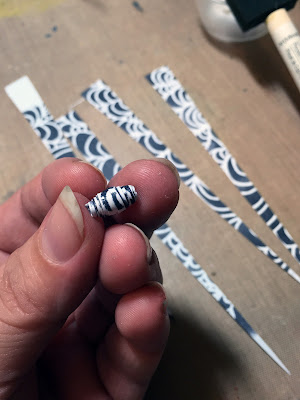 This gives you a smaller, tapered bead. These are very fun for making jewelry (there are also lots of other shapes - if you Google it, there are patterns available online, or you can make up your own!) I made a few of these and mixed them with some slightly shorter tube beads and some other beads to make a little bracelet: 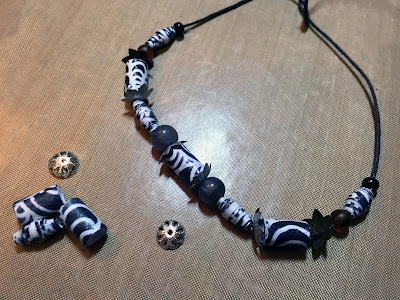 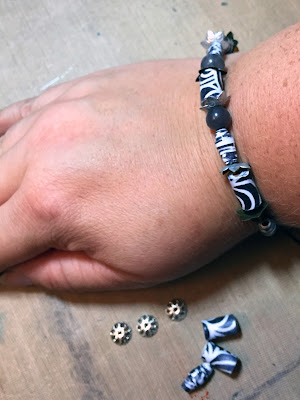 That's it for this month's project! I hope you enjoyed it, and if you make some of your own stenciled beads, please make sure to come back and leave a link so we can see them! 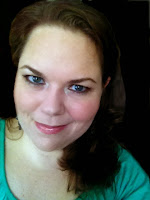