Hi everyone, it's Gwen back again with the May installment of Gwen's Gems! This month I was inspired to finish a project that I'd started a few months ago that's been sitting in my "to-do" pile ever since. When I first got my batch of StencilGuts, I knew that I wanted to use one of the hands to make a sculpture and put it in a kind of shrine (for lack of a better term.) I'm so glad that I went back to this project, because it turned out even better than I'd pictured! (Granted, I hadn't pictured much... LOL.) 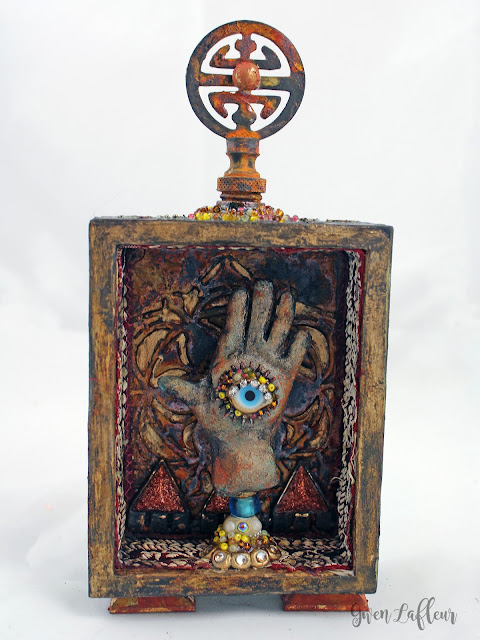 Since this was a pretty involved project, I don't have a detailed tutorial this month, but I have an overview of the steps I took to make this - hopefully it will help you if you're interested in doing something similar!

To start, I took my hand StencilGuts and made one of them into a sculpture. (These are sold out right now - make sure you get the newsletter to know when they're back! However you can always get the original Hands stencil by Jessica Sporn and trace your own hand.) I used cardboard to build up an armature on top of the hand cut-out, then I coated it with Aves Apoxie Clay and shaped it until it looked right. I added a very thick wire in the base that I kept there to mount it later. I followed that up with a coat of paint, then an initial layer of dry brushing. 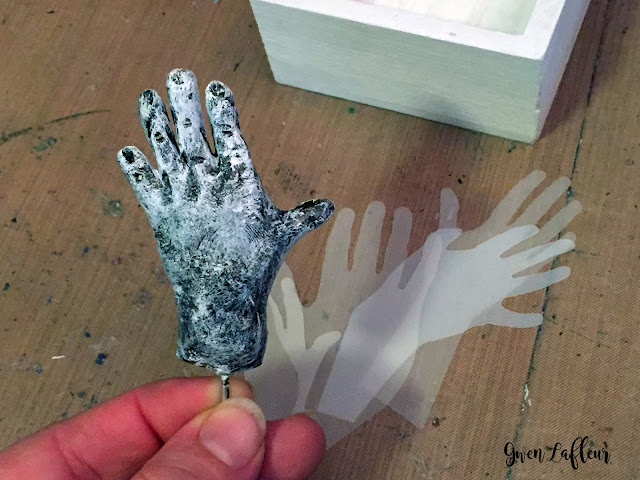 Next up, I finished the dry brushing - there are at least 15-20 layers of paint on here... I just keep adding until I get it looking the way I want it. In this case I wasn't going for realistic (because creepy, right?) but I wanted it to look like stone. I added a gear and a glass Turkish nazar, then put more clay on to turn the nazar into an eye by adding eyelids. 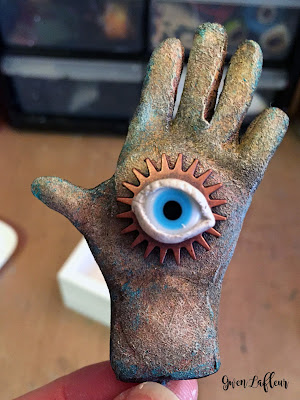 While the lay was curing, I took a light wooden box (probably balsa wood, it's so light) that I'd picked up at a thrift store for like $0.50. I gesso'd it, then used Laurie Mika's Pilgrimage to Mexico stencil along with molding paste to add a raised design along the outside of the box. You can see that I put it on pretty thick since I really wanted the texture to show through. 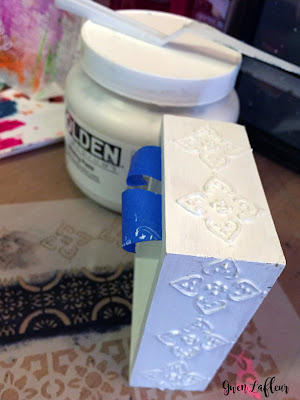 I did two sides, dried it, then did the other two sides. In between, I worked on what was going to become the background on the inside of the box. I cut a thick piece of cardstock to the dimensions of the inside opening and used my Decorative 6-Petal Flower Stencil to put on a very thick coat of molding paste. 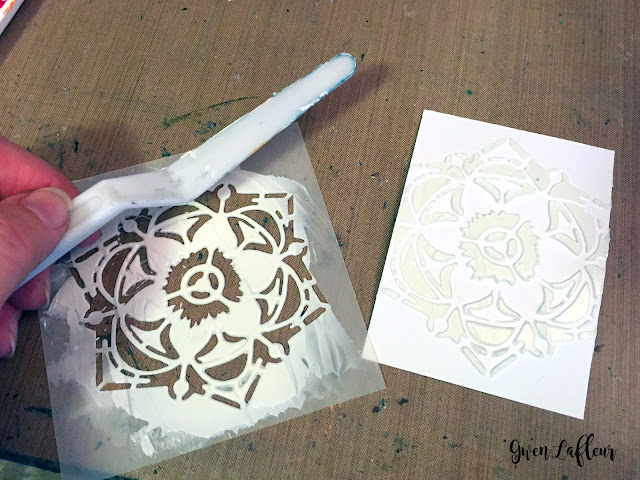 Here you can get an idea of exactly how thick I made it. I did this all in one coat - you just need to make sure that your stencil is kept flush with the paper, you put down a smooth coat, and you remove the stencil peeling in one direction slowly. It takes a bit of practice to get it to work without seepage, but when it does... so cool! (Who says you can't get thick texture with a thin stencil?) 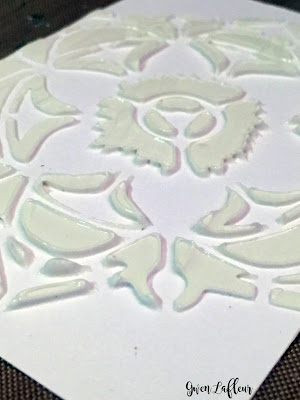 This is where I got really caught up and didn't take many pictures, but I'll give an overview... I glued in my dried background piece and then painted the inside of my box bronze, Then I used some VerDay paints (I used the iron paint) and the aging spray to rust everything, including the metal parts of some of the bits I was planning to add to the piece. I left that to dry for several hours, then came back and added scrap sari ribbon around the inside of the box. 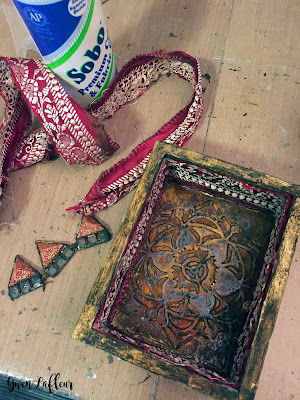 Next up, I put a piece of broken jewelry on the bottom-back of the inside, then added some metal findings as the feet, plus a cool Asian looking finial type piece of metal on top. The jewelry is adhered with strong glue, the feet and finial are all held on with Apoxie clay. Once that was in place, I created a mount for the hand, put some beads on the wire to cover it, and set that in place (and added some rhinestones, of course!) 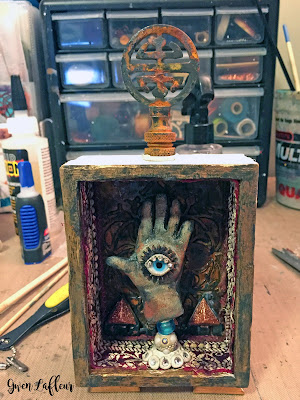 Once the clay was cured, I painted the outside - a layer of Payne's Gray topped with a gold-blue interference paint. I added seed beads around the finial, over the top of the eye, and on the base of the hand. Then I used some Rub 'n Buff to highlight some of the raised stenciling and also darken the edges of the wood. 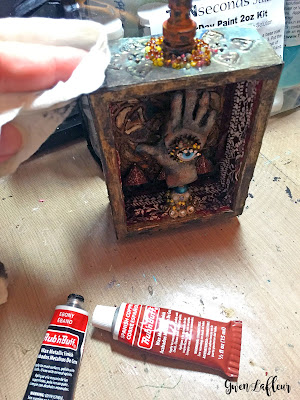 So there you go! A fun little mini shrine using stencils. Here are a few more views so you can see some of the details: 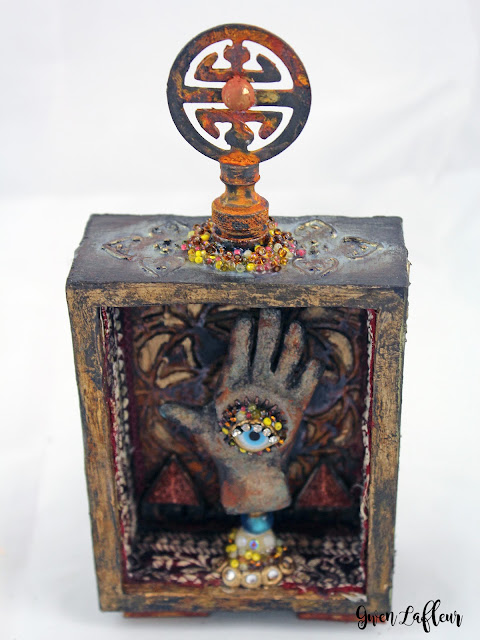 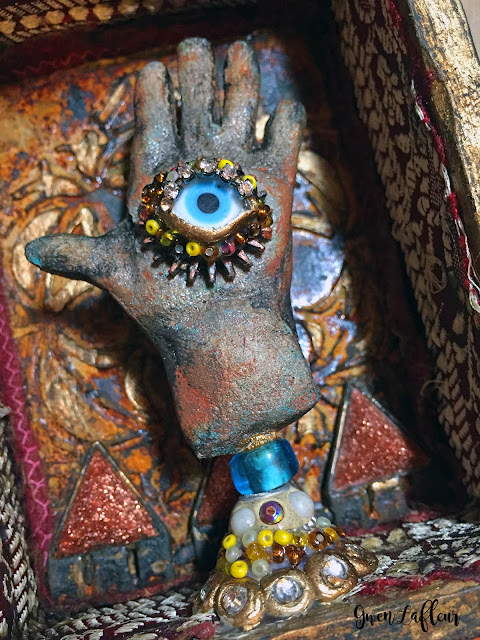 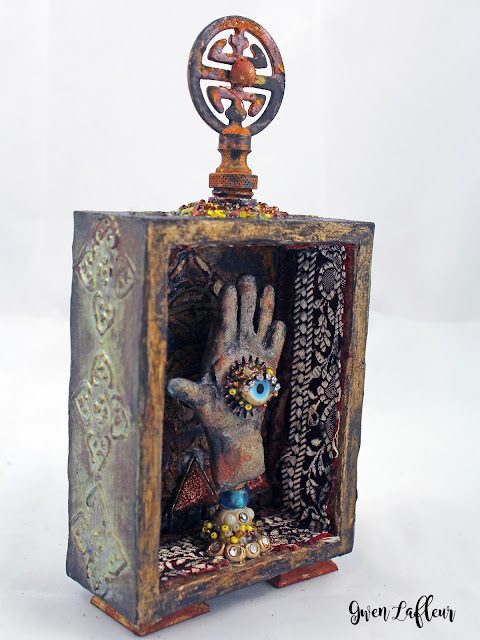 I hope you enjoyed today's project! Have you got any in-progress projects sitting unloved in your studios? We'd love to see how you use StencilGirl stencils to finish them off!