Hi everyone! This is Gwen with another edition of Gwen's Gems. This month I was inspired by a few different things - the awesome Kunst Puppen stencils by Andrew Borloz, some new art supplies, and some gorgeous mixed media mandalas I've been seeing online lately. So, in true Gwen fashion, I decided to just mix them all together! 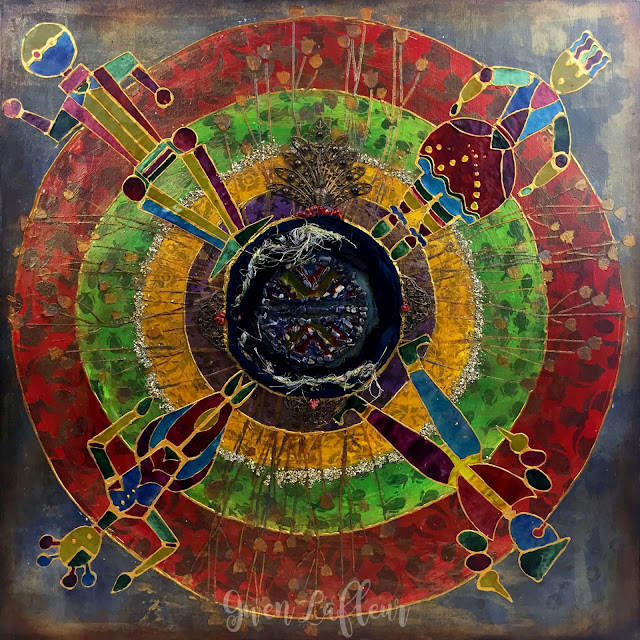 Ready to see how this one came together?

I started with an 18"x18"x1-5/8" birch panel which I gesso'd and then painted with light gray, neutral gray, and Payne's Gray. 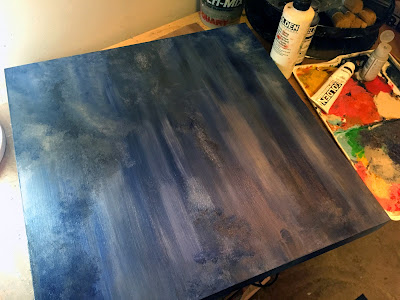 Next, I laid out a large circle of white as the basis for a series of concentric patterned circles. You don't need to use the white, and depending on the look you want to achieve, you may not want to do it. But I wanted very opaque layers rather than taking time to build up the color, so I took this route.

You can see below how it progressed - I started with shades of red and then stenciled with Nathalie Kalbach's Versailles stencil, then moved to a smaller ring of greens and brought in a little whimsy by stenciling the fish from the Aiden's School stencil (the first StencilGirl stencil I ever bought, and still one of my favorites!)

Finally, I finished by adding Lesley Riley's Night Sky 6x6 stencil around the edges of the background with graphite gray paint - I wanted it to be a subtle, tone-on-tone look so this was perfect.

Going through this or a similar process, you want to make sure each layer is dry before moving on. If you need to knock back some of the color before adding the next circle, bring the white back in (that especially needs to be totally dry!)

Next, I wanted to bring in some elements that would radiate out from the center at 90 degree angles so I used Cecilia Swatton's Nosegay stencil with gold embossing paste at the cardinal points of the circle. 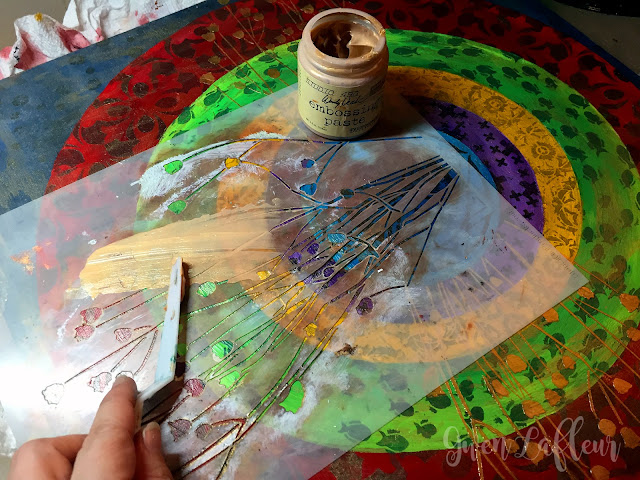 Next, things get really fun... this is where I pulled in my other two inspirations - new Pebeo paints that my friend Patty recently me introduced to, and the Kunst Puppen Set A and Kunst Puppen Set B stencils by Andrew Borloz.

I had in mind that I wanted to do something create some elements that would look kind of enameled to embellish my piece, so I started by stenciling four of the "puppen" images on deli paper with gray gesso. 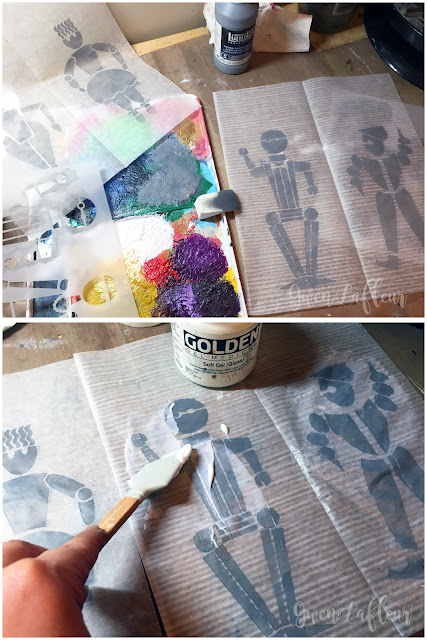 Next I added a very thin coat of soft gel (glossy.) I knew that I was going to use some Pebeo Vitrail paints, so I wanted to plasticize the surface of the paper; these paints work best on glass or a glossy, non-porous surface.

When the gel was totally dry, I used the Pebeo Cerne Relief paste in King Gold and outlined each of the images, adding some details here and there over top of the stenciled backgrounds and closing off any openings (the paste creates the "walls" for the paint that will go inside.) 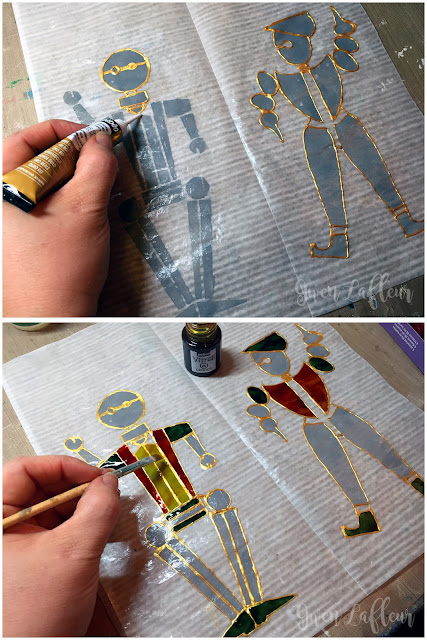 I set them aside until the relief paste was dry, then brought them back and started adding color with the Pebeo Vitrail paints in colors that matched what was already on my panel. I just used a cheap brush to apply, and you can clean the brushes in odorless mineral spirits (like Gamsol.)

I love how they really do give a stained glass effect! 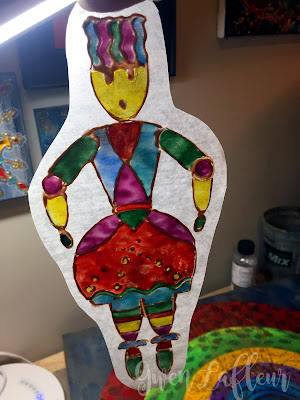 I set my painted people aside to dry and then went to work on embellishing the background. To start, I applied a coat of light brown glaze and then wiped it back - I wanted to pick up some of the dimension around the stenciled texture paste flowers. When the glaze was dry, I used some fabric glue and sari yarn and coiled some of the fabric around the middle circle.

At this point my people were dry, so I cut them out, keeping my cutting very detailed so it would look good on the panel, then adhered them with gel medium. You can see in the bottom photo above how I also used polymer medium in a fine tipped bottle as the glue to apply coarse gold glitter around one of the circles.

Finally, I pulled together the center section. I took some metal findings and cut them so they would fit around the circle and added a bit of wax to give them more depth and glued those down. I also took some lapis chip beads and glued them along the stenciled lines from the middle of my Art Deco Medallion. I added a bit more color in some of the wells I'd created with the beads just to get some continuity throughout the entire piece.

I used some gold dimensional paint to cover the seams where the metal was tucked into the center section and also to tie it in with the gold on my people - I repeated this along each of the circles. Finally, one last touch... the findings were screaming out for something to finish them off, but jewels - my normal go-to for this - were too much. Instead I added a few red glass beads - I glued them in place and used more polymer medium to seal them. 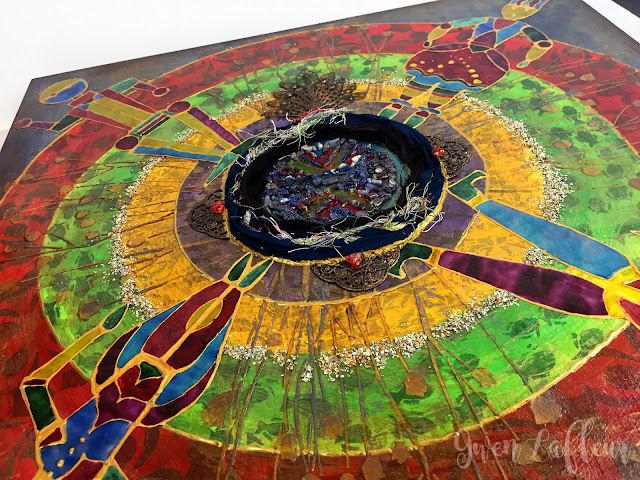 Here are a few close-ups so you can see some of the details and dimension from all of the different elements: 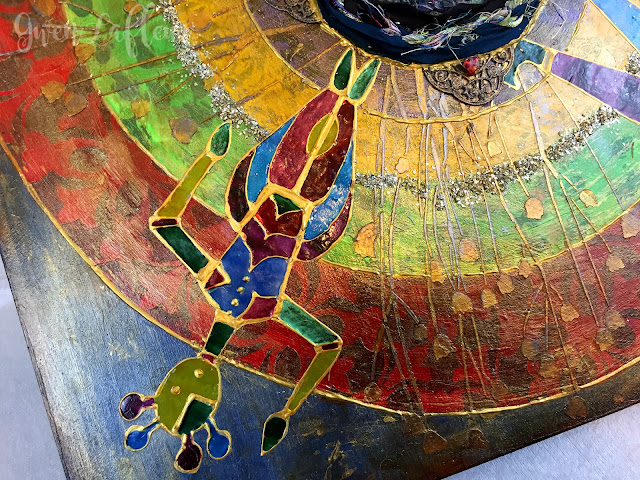 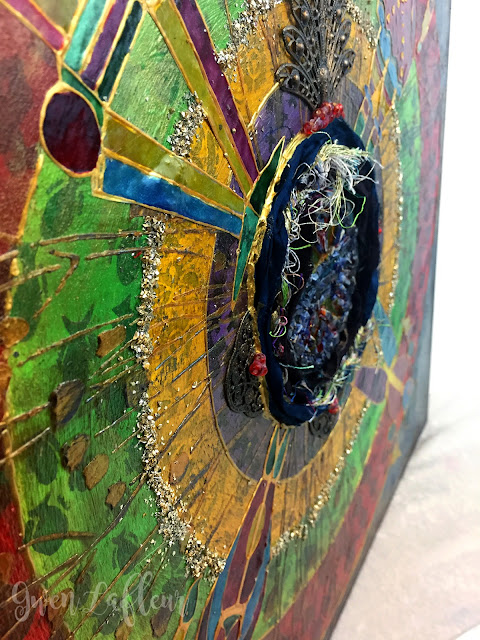 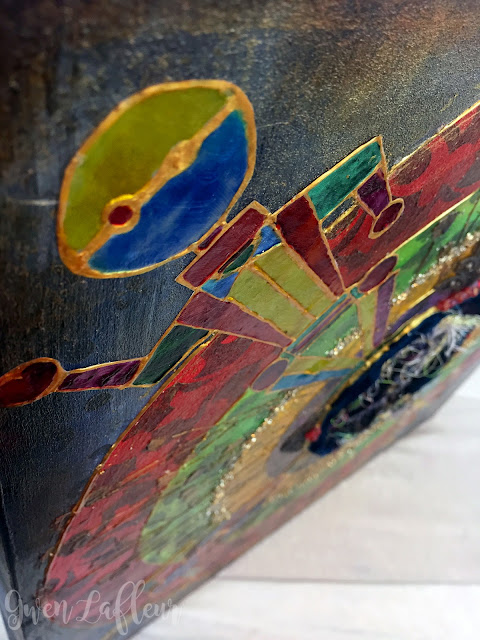 That's it for this month! I hope you enjoyed today's project and maybe picked up some new techniques or ideas to try with your stencils. I'd love to see what you make!