Gwen's Gems - Get Translucent with your Mixed Media!

Hi all, it's Gwen back with the December edition of Gwen's Gems! This month I was intrigued by the idea of doing something that was transparent / translucent in some way as opposed to working in a journal or on a canvas or panel. I decided to do some experimenting, and ended up creating an abstract mixed media assemblage with a translucent background based in an embroidery hoop! 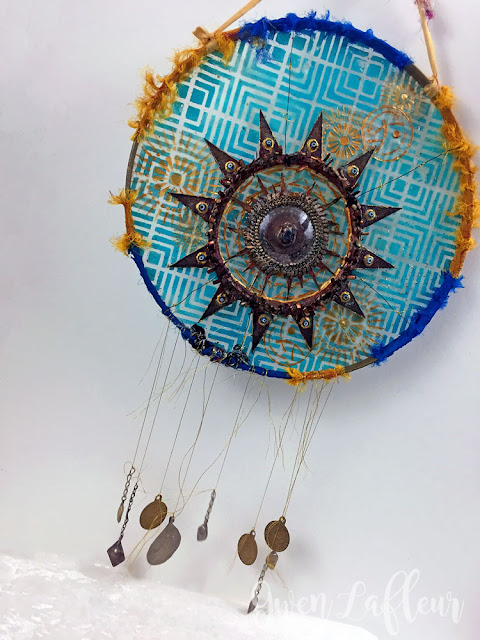 It's a bit funky, but I really like how it came out. Are you ready to see how I made it?

To start, I took my Art Deco Medallion stencil and just traced the outside border of the circle onto a piece of chipboard, then I cut out the ring. 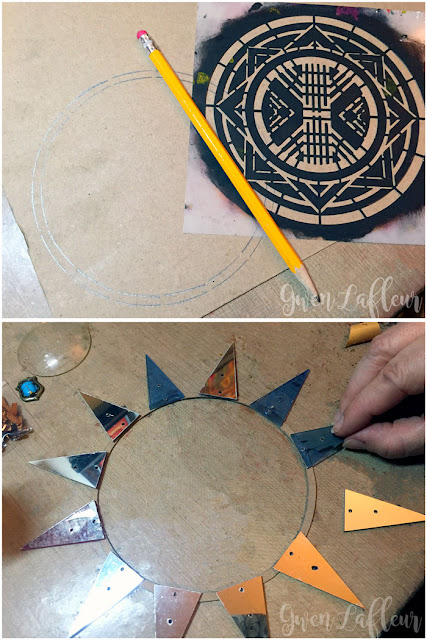 I had a bunch of these mirrored triangles that I'd picked up at a creative reuse center, and I liked the idea of creating something reminiscent of a sun, so I adhered those around the chipboard ring.

From here I mixed up some Aves Apoxie Sculpt (2-part epoxy clay,) and rolled out a line of it which I then layered over the ring. This locked all of my triangles in place, and also gave me somewhere to insert a whole bunch of rectangular copper sequins which I added in random directions until it was full. I also took the slip from working with the clay and spread that over all of the triangles to prime them for the paint I'd be adding later. 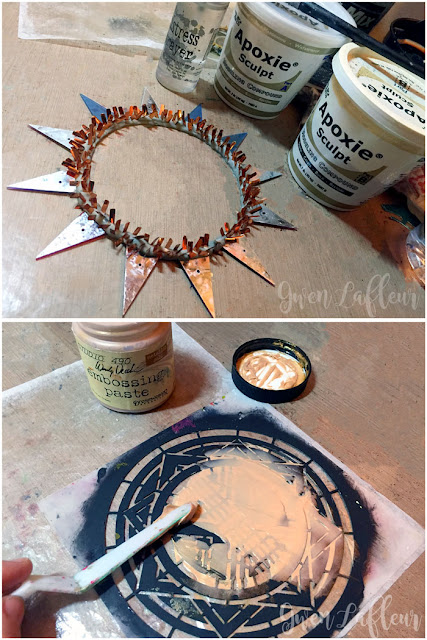 I set the outside ring aside to give the clay time to cure, then started working on the inside elements. To start, I took a sheet of rice paper that I'd plasticized with polymer medium and used a gold texture paste with my Art Deco Medallion stencil to start making the background that would go in the ring.

While that dried, I gathered several different elements from my stash along with a sun shape cut from cardstock using Seth Apter's Sunburst Die Set and used waxes and a gray glaze to create consistency between them before assembling them as part of the focal point. 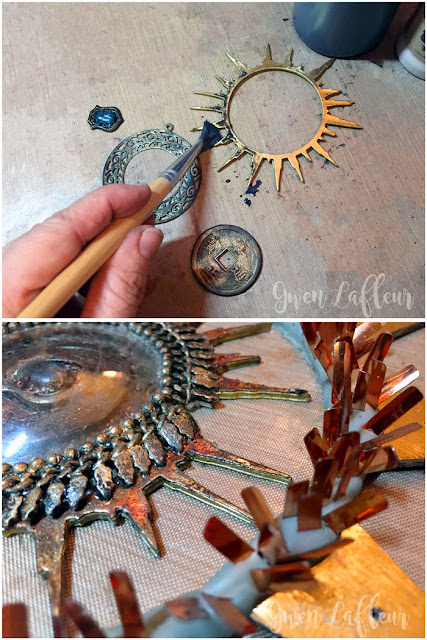 Above you can see a close-up as I measured things out... I layered my glazed components along with a piece of a broken necklace and a cool glass dome that fit perfectly over everything.

When the clay was cured, I pulled my ring back out and painted it - I didn't worry about changing the color of the embedded sequins, just making sure that nothing from the base layer was showing. Then I added some embossing powder to enhance the rusted / patina look I wanted. (Just a note, the sequins are a thin plastic and will curl and melt a bit when you use this kind of heat gun. I actually wanted that effect - I thought it added to the character of the piece!) 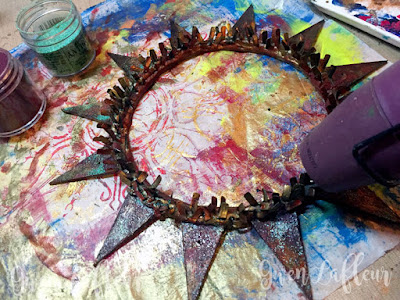 With that done, I cut out my stenciled translucent background and adhered it to the back of my frame. 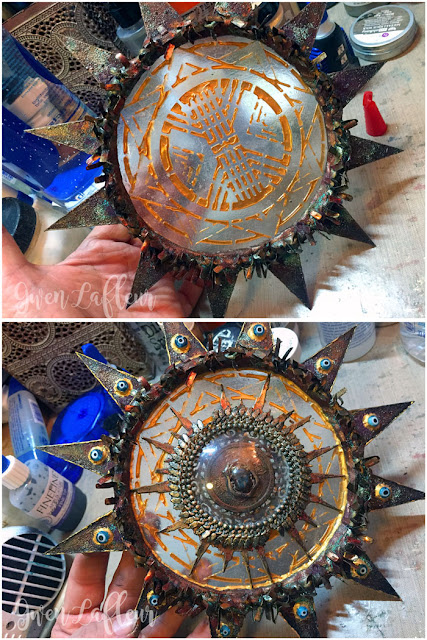 Then I adhered the focal point to the center of that and added some Turkish Nazar beads to each of the triangles (those covered up some small holes that still showed through the paint.)

Next up, I wanted to create more translucent elements that I could use to anchor the center section inside of my embroidery hoop frame (I sanded the front edge of the frame to a curve to get rid of that hard line, then painted it bronze.)

To do this part, I used the Asian Character Impressions 3 Mini stencil by Carol Weibe and a few of the designs from the Circle 6 stencil by Michelle Ward with more gold texture paste on my plasticized rice paper. When they were dry, I cut them out and then arranged them until I liked how it looked, then adhered them in place. 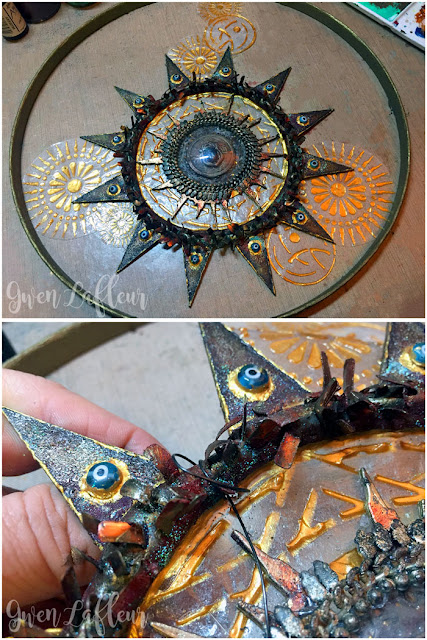 Of course, the polymer coating made that paper much tougher than it was, but it wouldn't hold the weight of the center section, so I took out some 24 gauge annealed wire, poked a few holes through the translucent background, and wrapped some wire around my sun frame, then wrapped the other end around the embroidery frame. I did this in five places and it was a little tricky, but I got the whole thing anchored in place and it held perfectly! (Whew!) I used a few drops of polymer medium to seal the holes around the wires, then I was good to go. 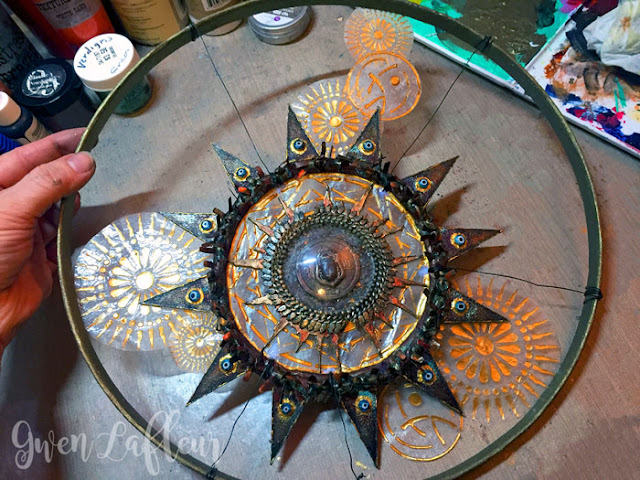 Of course, you could leave it like this and it would be pretty cool! I almost stopped here, but more is more, right?

Next I took some sari yarn and wrapped it around the frame, skipping places where the translucent background was connected. 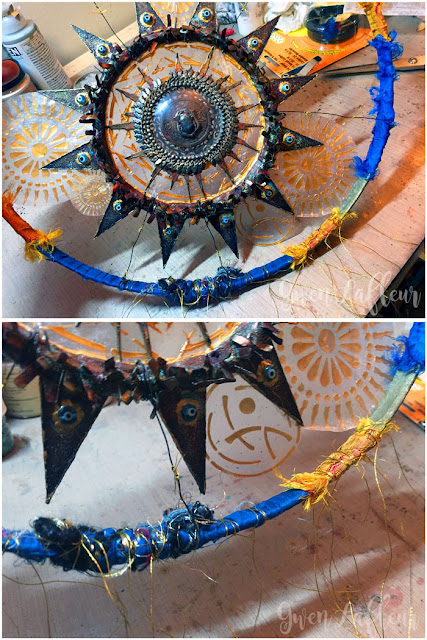 I also took some gold thread and wrapped it around, leaving long tales hanging off the bottom where I added some Turkmen jewelry pieces to dangle below the main piece. (Normally, I'd add something like that last, but I needed to have anything that would wrap around the frame done before getting to the next step.) 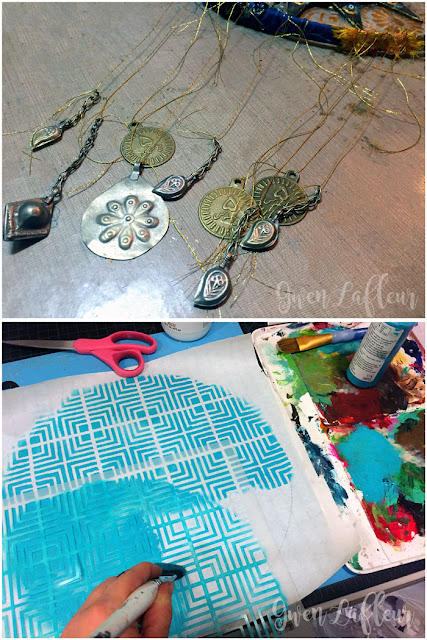 After that, I wanted to add one large background, so I cut some more rice paper off of a roll and stenciled it with teal paint and Nathalie Kalbach's Manhattan stencil. Next I coated this paper with polymer medium as well and let it dry overnight.

Once dry, I cut out the circle and adhered it to the back of my frame - I love the contrast from the color and pattern! 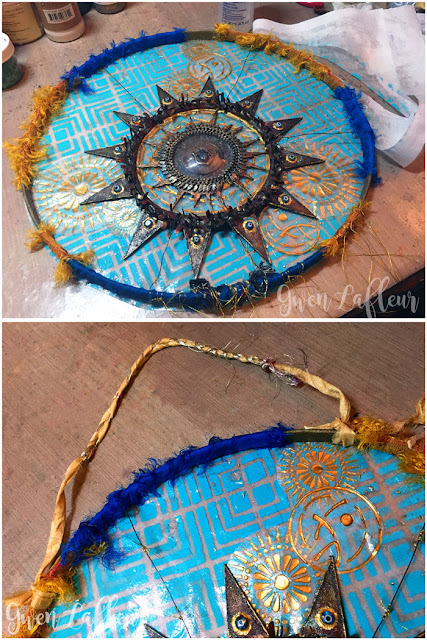 Before adhering completely, I took some more sari ribbon and tied it around at the top to make a hanger of sorts, then sealed that off as well.

With that, I was done! 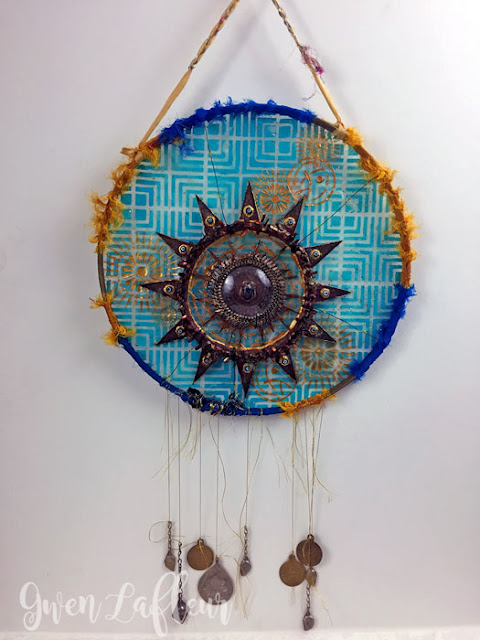 Here are a few close-ups so that you can see more of the detail: 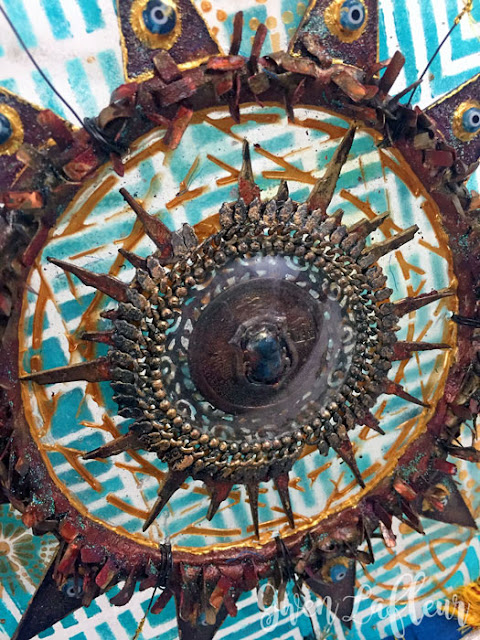 You can really see how the light comes through the translucent backgrounds - I love the effect! 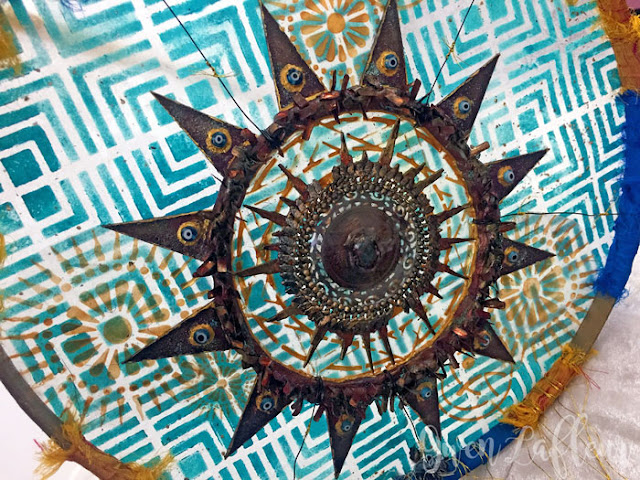 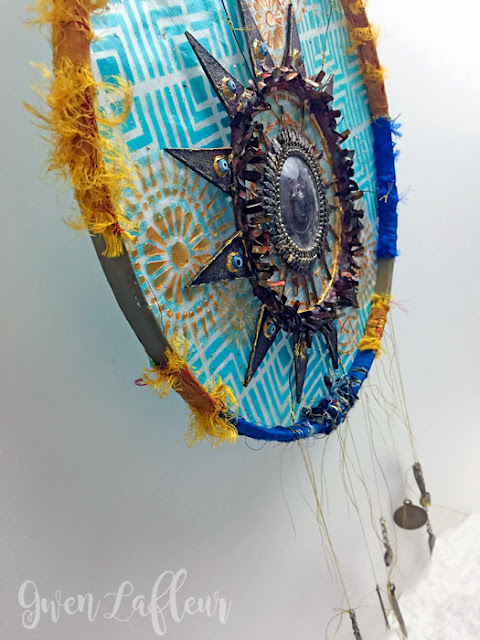 I hung the finished piece on the door of my studio - the dangling jewelry bits act a bit like chimes when they move, which I love!

That's it for this month... I hope you enjoyed today's project and that you're feeling inspired to add some translucent elements into your own work! 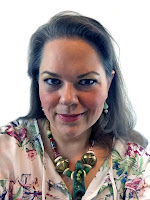