Hi, servus and thanks so much for stopping by today!


Claudia here to share with you a journal I've created for our actual "Stenciled Poetry" theme over here on the StencilGirl® Talk blog.

The cover design was inspired by my favorite Beatles song "Eleanor Rigby", which has been one of my all-time favorite Beatles songs since I was eleven or twelve years old (which was when I got the "Revolver" album as a reward for good marks at school). Already back then I loved the poetry and images in the lyrics created by Paul McCartney and at that time (and for many years more) I often felt that English was a much better and more beautiful language to write poetry and song lyrics in than my own (which is German).

In this blog post, I am also sharing a stepped-out video tutorial that shows how I've done the cover. Right after the cover part, there will be some step-out images that show how I've finished the journal up by adding fabric and doing a quick and easy binding.

I used one of Eileen Hull's dies to cut the covers from heavy greyboard, but I could as well have hand-cut my own covers in any size needed (I sometimes do that when I already have some cheaply bought notebooks to go inside the journals so I do not have to cut the signatures myself). In this case, I trimmed off the third section from the three-parts spines.

I also used two pieces of cut to size rough fabric from an old kitchen towel (to the left). The red fabric strip is the hanging loop from that towel and I kept it for later use as I liked the bright red and the design. 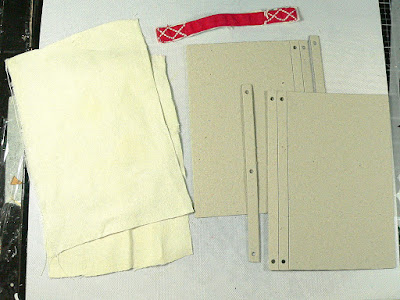 This image shows the colors of DecoArt Americana acrylic paints I've used alongside some of my favorite StencilGirl® stencils (you can click on the picture to get a larger view if you would like to read the names of the color tones). As you can also see I have already prepped the covers with a layer of white Gesso that I spread with a plastic card and dried using my heat tool. 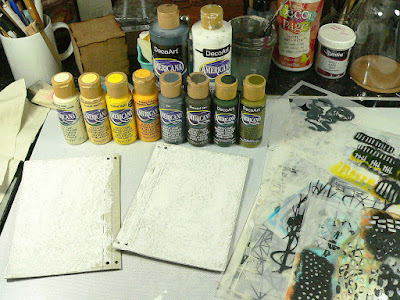 stencils used in this project: 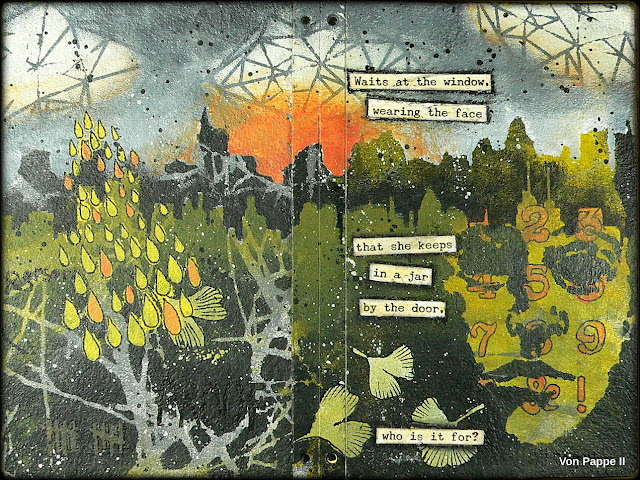 My idea was to capture the scene where Eleanor "waits at the window, wearing the face that she keeps in a jar by the door". And I assume she does not know herself who she is wearing it for. Herself? The world outside to hide behind it, because this isn't her "real" face that she does not dare show?

The wind is blowing Ginkgo leaves past her window and the spectator does not really know if he is seeing the reflection of these and the cityscape in the window looking inside to see Eleanor's face behind the glass or if it is the other way round with Eleanor seeing her own reflection in the window while she is looking outside...seeing "the sun going down and the eyes in [her] head see the world spinning round" (which is another quote from one of my favorite Beatles songs ;). 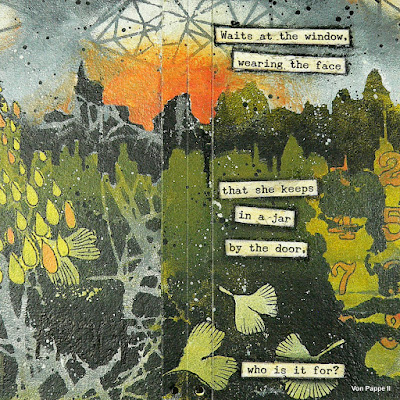 I have also added a handle to carry the journal with - which was a spontaneous idea as this was the fabric loop from the used old kitchen towel I have used to add fabric to the covers' insides. 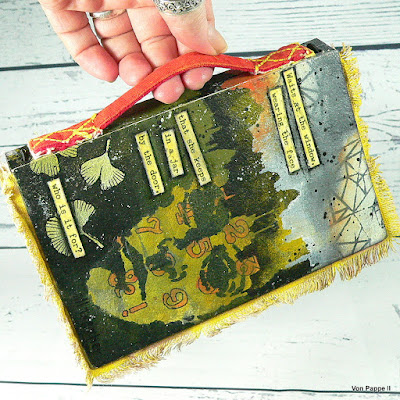 But for now, I recommend you get yourself a cuppa and enjoy the 18-minute video tutorial that shows how I've done my layers and effects using the stencils and paints mentioned earlier. There's a list of stuff used at the start of the video as well by the way.

Once my cover was done I glued the cut to size fabric to the covers' insides (using matte DecoArt Decou-Page) and frayed the edges for a worn and grungy look. 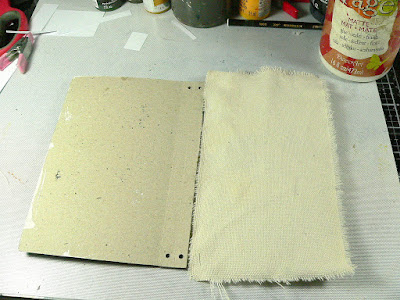 The fabric still looked way too clean though for what I had in mind... 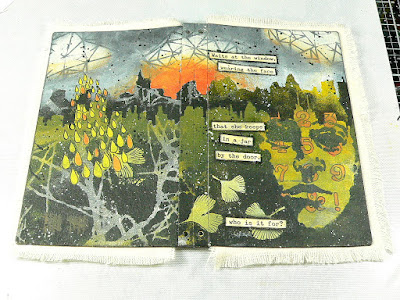 ...so I toned that down using a layer of diluted DecoArt Americana "Walnut" Gel Stain and a brush... 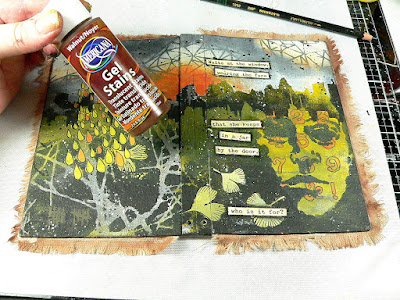 ....that was followed by a loosely added layer of "Yellow Light" Americana paint that I stippled on with a bristle brush. 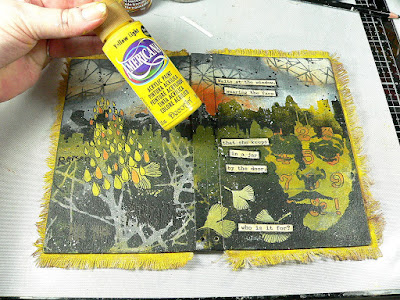 I thought the red fabric handle would look great on my grunge style journal, so I glued that in place
using a good load of matte Decou-Page and heavy-duty clasps to keep everything down and in place
during drying time. I toned the dark red in a bit though by adding a thin layer of the Yellow Light on top. 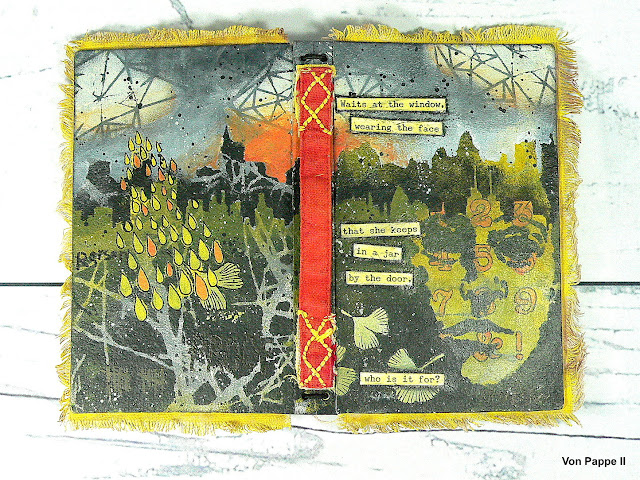 I also included some rather "secret" messages (or some of Eleanor's hidden thoughts?) by using Seth Apter's "Numbers" stencil and adding some stenciled on words here and there that aren't visible at first sight... 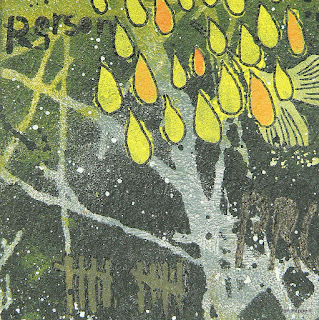 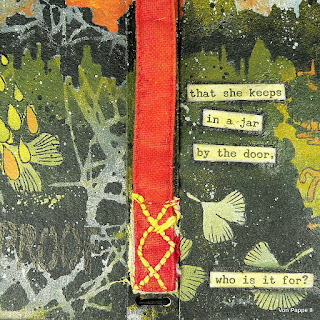 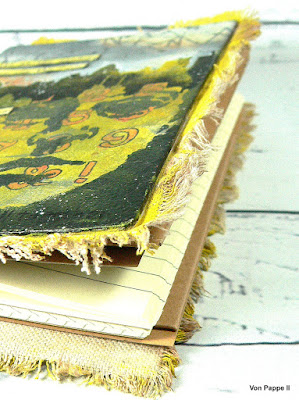 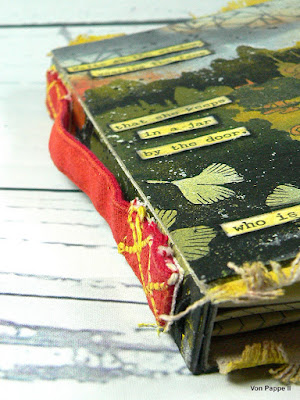 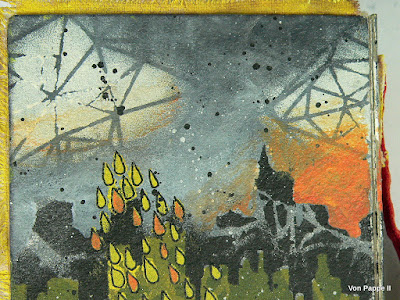 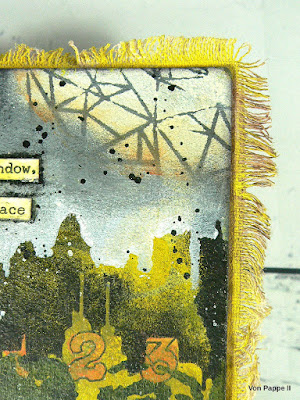 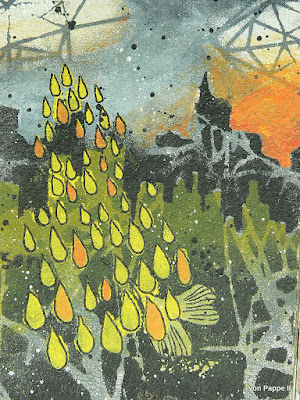 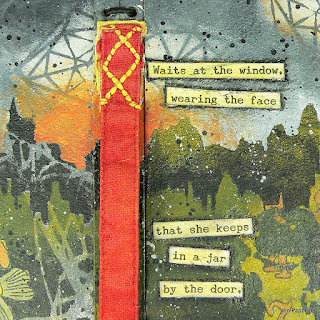 ...and the inside of the journal.
I have used bought notebooks of almost matching size and simply cut them a bit narrower
using my guillotine scissors. For the binding, I used an elastic black ribbon. 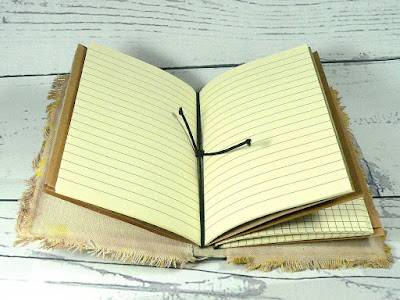 Once more the finished journal: 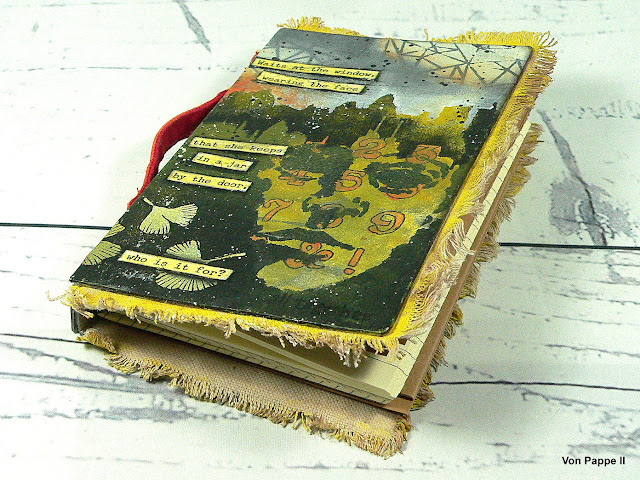 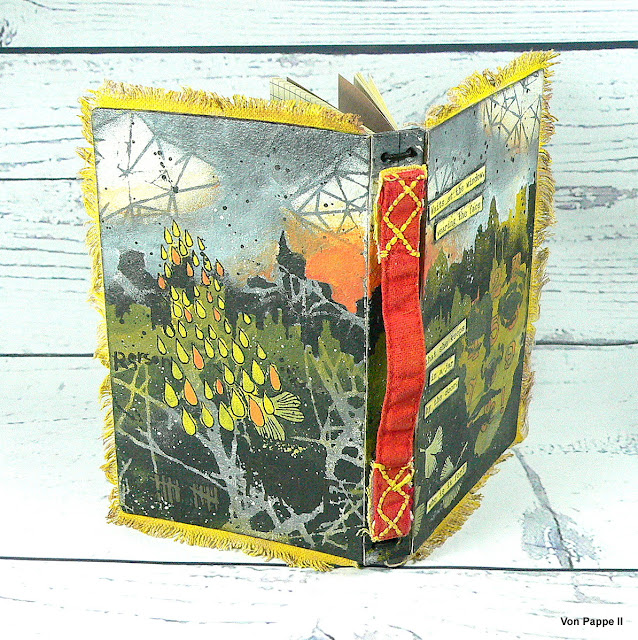 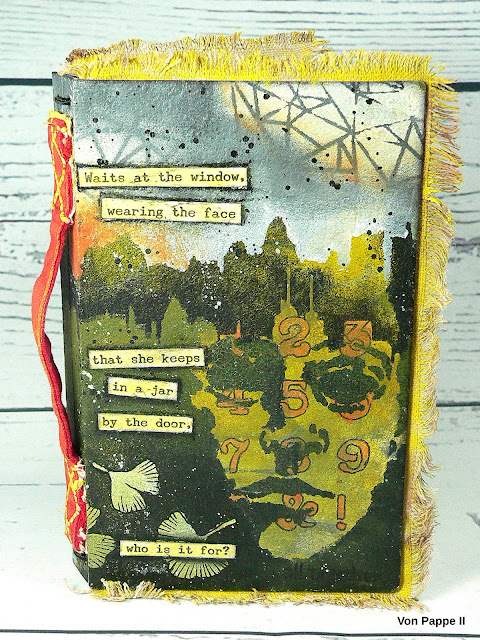 I hope you like my "Stencilled Poetry Journal" and the video!