My goal for this presentation is to show you how I use StencilGirl® Stencils and the process I went through to be able to re-use the same stencil within a series but producing a new feel to the pieces.

My name is Alexandra Treadaway-Hoare (as in Hoar Frost). I was born in S.E. Asia, of Canadian Parents, educated in North Africa, Europe, UK, and Canada. I spent my adult years in the Corporate World in Canada and the US.

Ten years ago, I started serious Art Studies in my chosen medium of Watercolor, under David Daniels at The Smithsonian Institute, and continue to study under his tutelage. As of five Years ago I have been a professional Artists. I have earned 4 Honorable Mentions from Juried shows over the last two years from regional, national and international competitions. I have had two One Woman Shows and will be in a Two Women Show October 2 & 3 2021 at The Yellow Barn in Glen Echo Park.

Three years ago, I was introduced to ‘StencilGirl®’ stencils and now they are in a sizeable number of my works.

I painted a series of Birds using StencilGirl® stencils as the background: 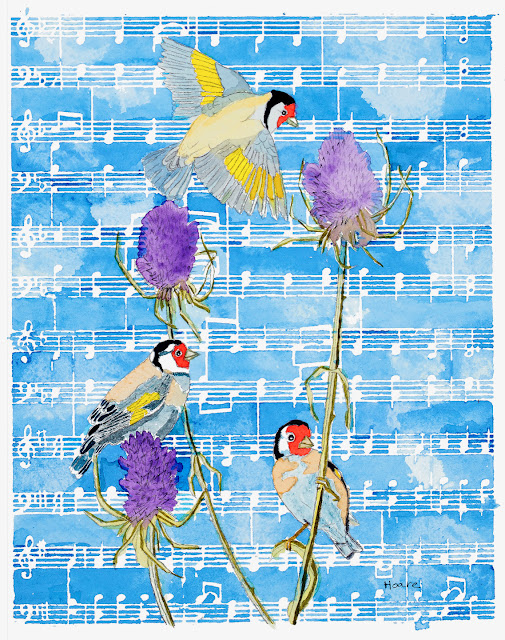 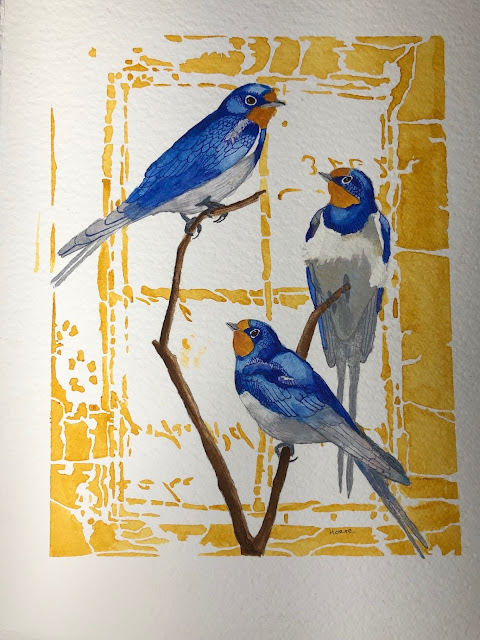 Bluebirds in a Barn
Window Ledger 9 Stencil by Pam Carriker

I also painted a series of flowers using StencilGirl® stencils as the background: 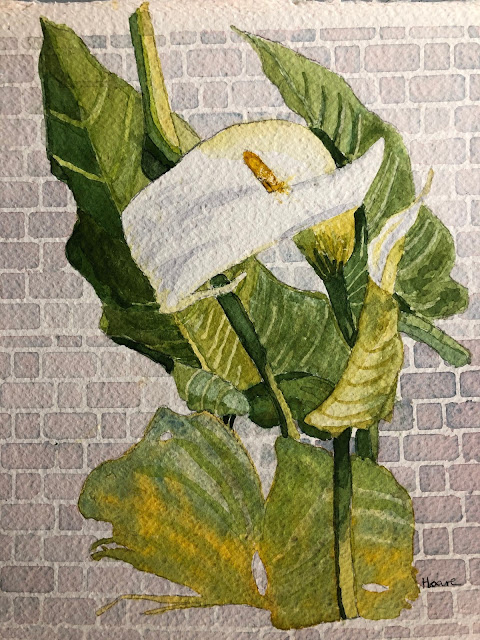 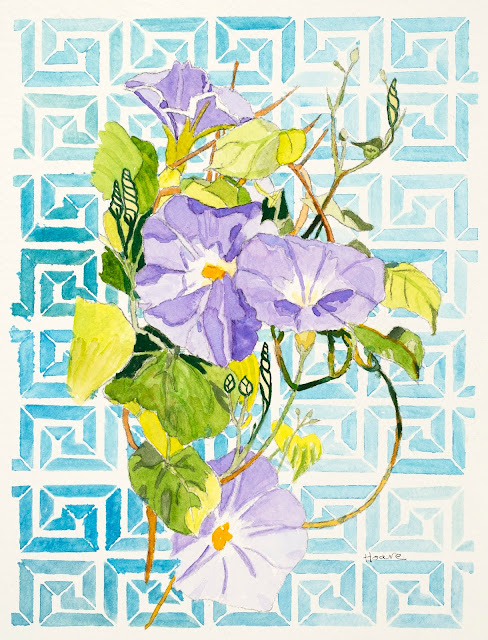 In the next painting I used a 12x24” StencilGirl® Stencil where I used only Tertiary colors in the background:

Much as I enjoyed using the stencils, I was finding one problem…… I was not having much success re-using the same stencils no matter what the subject of my painting!

So here are my thoughts as I completely changed how I used the same StencilGirl® stencil.

I went back to my Flowers series…….

First, I chose the flower, a rich deep purple (*Amethyst Genuine/Cobalt Violet) lily and I tinged the leaves to reflect the flower resulting in a strong purple central focus!  I lightly sprayed the back of my Black Birds in Trees Invert Stencil by Kimberly Baxter Packwood with Krylon Easy-Tack, let it dry and placed it over the central focus. Now I filled in the blank areas with different values of yellow (*Permanent Yellow Deep), being very careful not to paint over the purple flower or leaves. I let it dry and peeled off the stencil. I now had blank white areas depicting branches and birds. Choosing to cover my paper with paint, I chose a pale blue (*Duochrome Cabo Blue), to represent the sky. 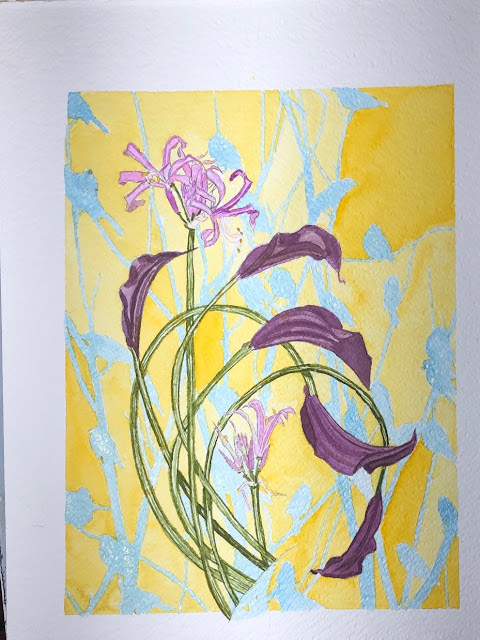 Now to use the same stencil to achieve a very different ‘look’!

I stayed within my flower motif, this time starting with my version of a few humble Dandelions, which I painted yellow (values of *Hansa Yellow Medium) and added green stems and made-up leaves. I laid the still tacky (months later!!) stencil over the central flower. I then took a ‘Micron” pen with archival black ink in a size 0.3 (felt like nib) and outlined the StencilGirl® stencil Black Birds in Tree l.  Again, I peeled off the Stencil. Now I had a lot of white paper, my version of dandelions and black line drawings! I started by painting the tree branches brown (*Raw Siena & Burnt Umber) and added sporadic green (variety on my palette) shoots at some of the branch ends and painted in just the visible beaks of the birds (brown as above).and stopped!  What I believed I now had was a minimalist representation of flower and flight! 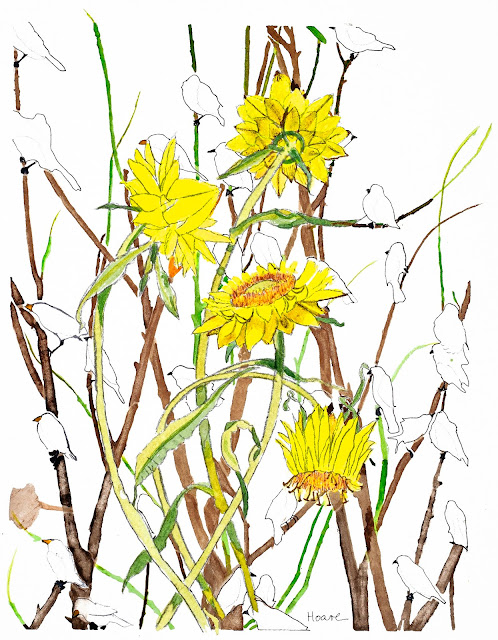 In this experimental piece for me, you’ll notice a bird head in lower left corner that had to have the ‘brown bark’ sponged away… I did want the birds head to be in back of the trunk, but the black ink showed thru, so I ‘fixed’ it. In the same general area you’ll spot a brown smudge; I knew that I couldn’t get it out so I added a stroke to imply a beak and left it alone!

The most powerful lesson that I learnt was to allow myself to leave white space in my painting! 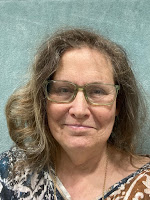