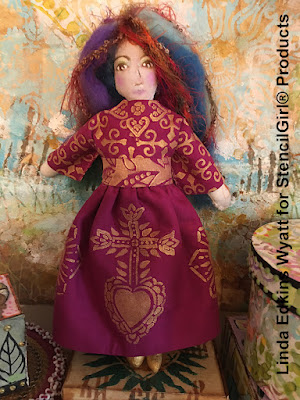 Hi! Linda Edkins Wyatt here, with my first EVER rag doll! The doll-making bug bit me exactly 10 years ago—but for two-dimensional paper dolls—I was a little intimidated by the stitched and stuffed three-dimensional dolls.

But, after 10 years, I decided it was time to kick my doll-making up a notch and try my hand at creating a stuffed doll. I had a vision in my head of what she would look like…sort of a soft, young, fairy-type rag doll…but she had a will of her own and morphed into more of a kind, gentle, wise-woman. 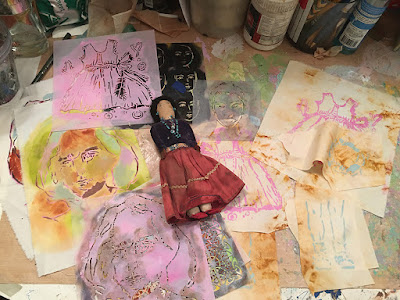 To start, I pulled out a bunch of StencilGirl® stencils that I thought would be useful for making the face, body, and clothes. I also referred to a childhood treasure—my Mexican folk-art doll—for design inspiration. 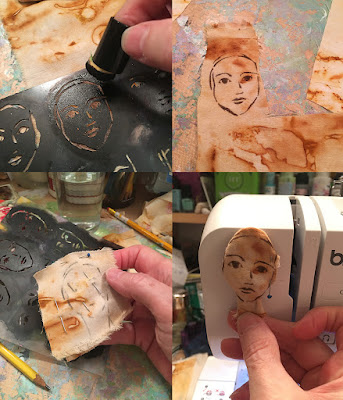 I began by stenciling one of Jennifer Evans’s Faces in the Crowd images on some scraps of rusted cloth. I made two, using one for the front and one for the back, pinned it, stitched, turned it, and stuffed with polyfil. 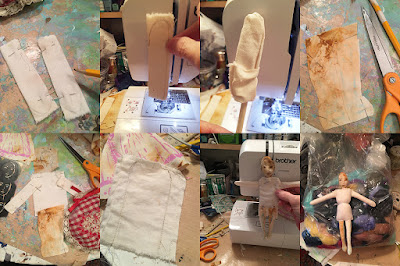 My original idea was to use Judy Wise’s Judy Judy stencil for the legs, and arms, and dress.  I did use the Judy Judy legs, but the arms weren’t quite the right size, so I designed my own. I cut a simple rectangle for the body, stuffed it, and cinched it in the middle. 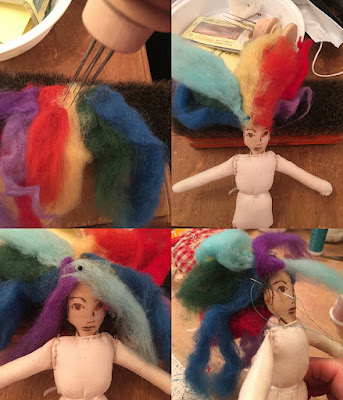 Next, it was time for hair. I wanted her to be magical, and I thought rainbow hair would work well. I used dyed wool roving, hand needle felted it to a piece of wool fabric, then stitched the felted fabric “hair” to the top of my doll’s head. The stenciled face needed some details, and some “foundation” to cover up the rusty spots. I mixed up some flesh-tone acrylic paint and dabbed it on. She went through an ugly phase until I toned down the look with some soft pinks. Still, she didn’t look like a young, carefree fairy…she looked like an old lady. I decided to embrace the mature look and create a doll that reflected the wisdom of an older woman. 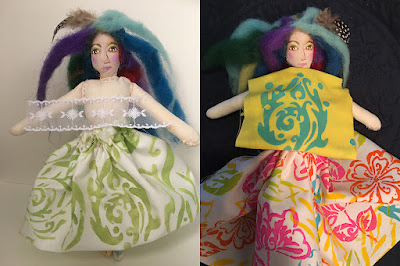 I was saddened to see that once I had stitched and stuffed the doll, the JudyJudy dress didn’t fit! So, I set about stenciling on fabric to design another dress. I experimented with my own Lemurian Garden stencils on both white and colored fabrics. While they looked good, the scale was too large for my doll. After much thought and many test prints, I hit on the idea of using a regal, wine-colored cloth with gold Lumiere paint, and utilized smaller-scale stencils. The color combination looked very magical, making me think of medieval castles, royalty, and Merlin the Magician. 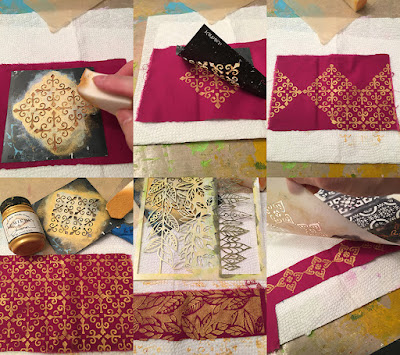 To coordinating with the skirt fabric, I set about printing more wine and gold designs. I loved the look of Nathalie Kalbach’s New Orleans 4, which I carefully repeated until I had printed a 6” square. 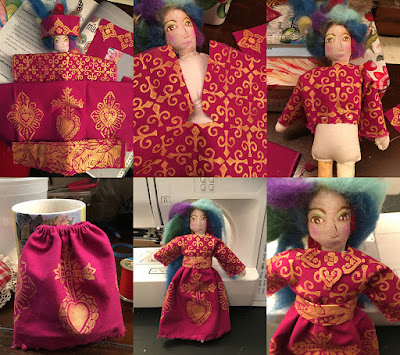 I draped the wine and gold fabrics around my wise woman to see which ones would work best with the skirt for a top and sash. Once I made my selection, I carefully cut and stitched those pieces.

The New Orleans 4 blouse needed a collar, so I cut a section from stenciled fabric done with Laurie Mika’s Pilgrimage to Mexico. That small detail was a perfect finishing touch on the blouse. For a sash, I used a favorite stencil: Leafy Doodle Verge by Valerie Sjodin.

My wise woman was almost done, but her hair needed tweaking. The rainbow hair was not quite right with the gold and wine colors of her ensemble. By adding a few strands of a red/gold/orange fuzzy yarn in the front and sides, the hair’s color scheme worked better. The final touch was painting her feet gold to suggest little magical boots. 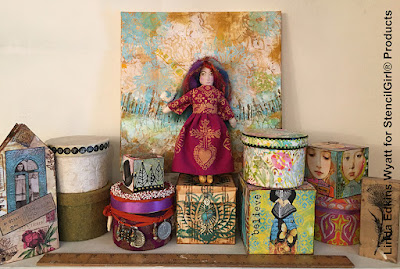 Now I’ve really got the doll-making bug. Be on the lookout for a whole collection of my stenciled rag dolls!