Mythical creatures have always intrigued me, some of my favorite being mermaids, dragons and unicorns. The Little Mermaid was my favorite movie from childhood. Being able to talk and sing underwater while sporting an iridescent tail seemed like the ultimate fantasy. And then I grew up and had a daughter.
My daughter has an incredible imagination. She has a pet tiger that lives under her bed, along with a unicorn that we found in an egg on one of our bedtime adventures. One night she asked me to tell her a story. Unlike her, I am not very good at using the imagination area of my brain. I draw all my inspiration from others and what is around me. I desperately wanted to be one of those parents in story books that make up tales that come to life for their children. I made up a story about a little girl that had her own pirate ship (she was into pirates), and her brothers were her first mates. On her very first adventure, she found an egg that she brought back to her pirate ship. After several days, the egg hatched, and a tiny pink unicorn with emerald colored eyes emerged. She was named "Em', short for Emerald. And from that day on, they would go on many adventures, sailing their ship and meeting all sorts of people and mythical creatures.
My painting today is one interpretation of "Em, the Unicorn."
I started off using Unicorn Magic to stencil my unicorn. 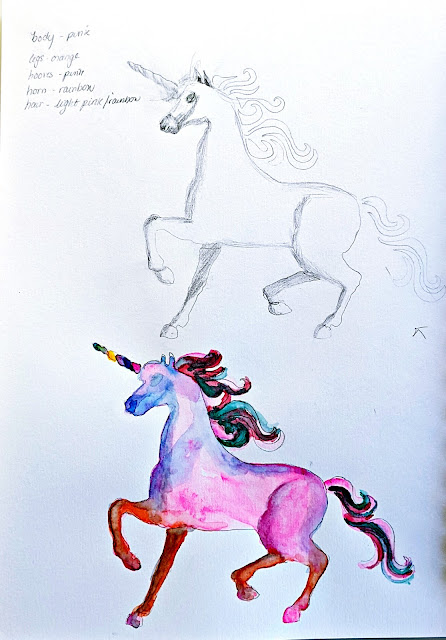 I made a few color swatches of paints that I wanted to use. I used Kuretake Watercolors. 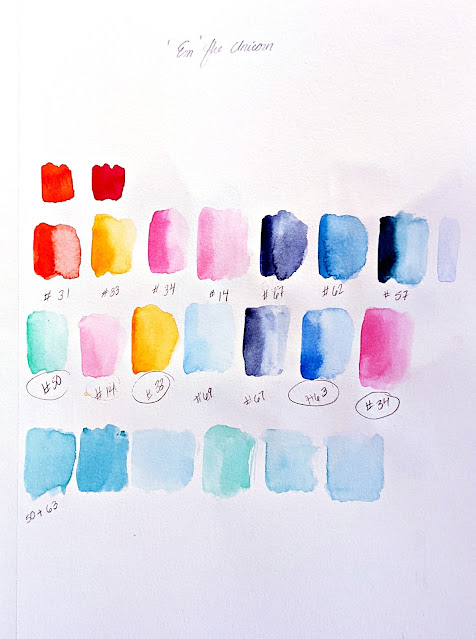 I added text using Celtic Alphabet Stencil and then tried adding a girl. 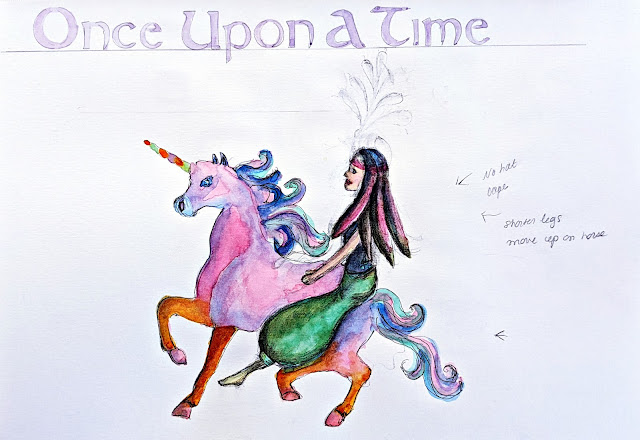 On this version, I made some proportional changes to the girl but decided to try embellishing the unicorn using the Botanical Wildflowers Stencil. 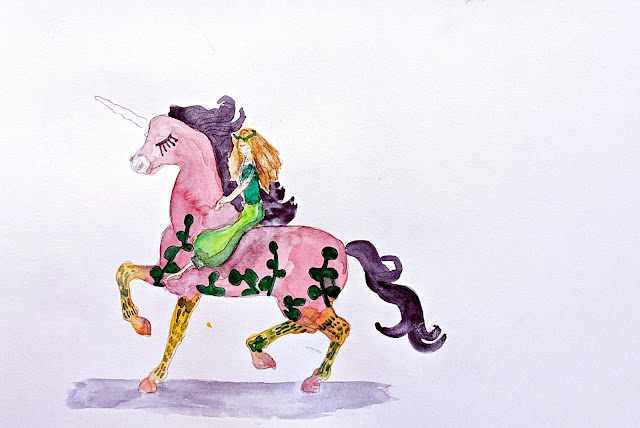 At this point, I still wasn't sure about free-handing a girl so I traced a plate and started filling in foliage around the unicorn. Here is my basic sketch. 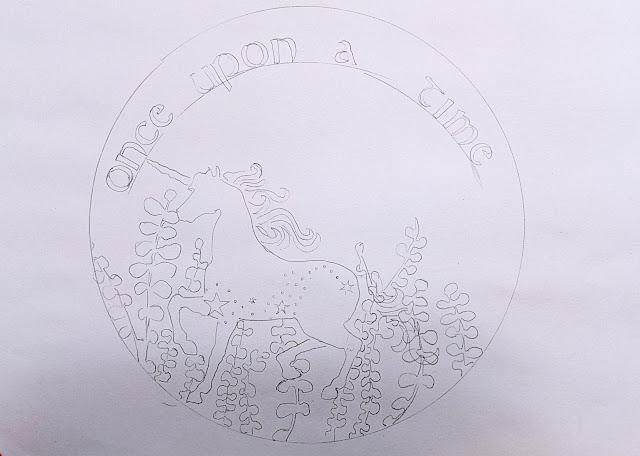 I transferred my sketch to 300gm watercolor paper, using graphite paper and a pencil. I like to paint in my recliner so this is my set-up, otherwise known as my lap. 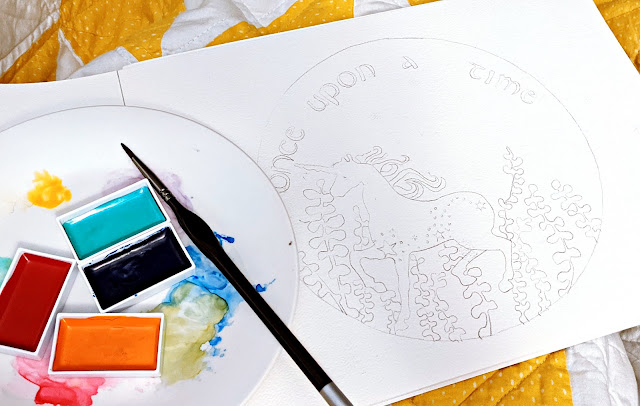 I recently purchased some masking fluid and here I am trying it out on the stars and dots on the unicorn body. 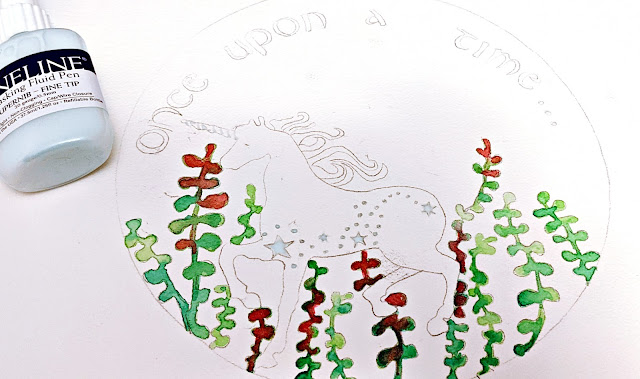 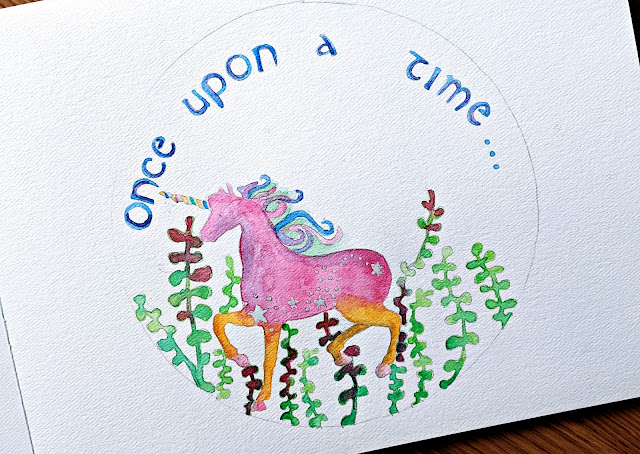 At the end, I added a few touches of gold paint to make it sparkle. 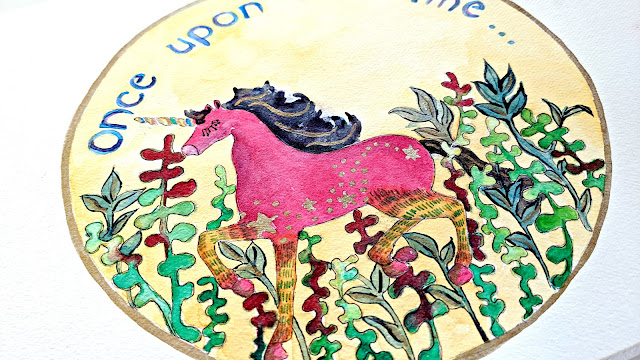 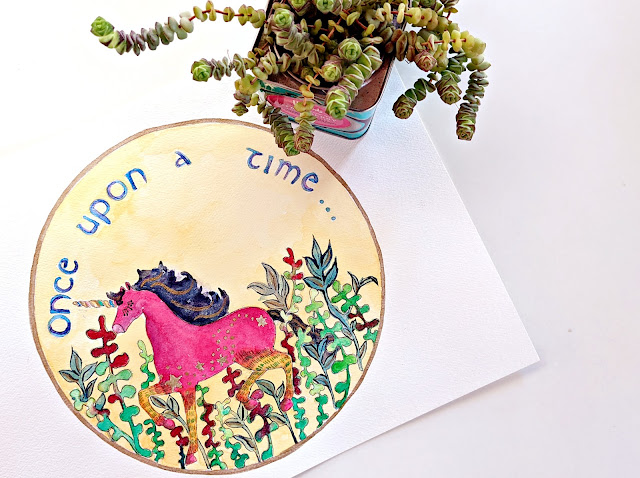 I had a lot of fun stretching my imagination to put together this illustration of "Em." I can't wait to try it again with different modifications and adding my daughter. Thanks for following along with my process and if you have any tips about illustration, I would love to hear them.
Until Next Time,
Kate
at 3:00 AM