Hello everyone! My name is Jackie P Neal,
and I am honored as well as Way excited to be a guest designer here on StencilGirl Talk!
For those of you who know me, you know how I love to up-cycle,
recycle, reuse and give new life to"the less than desirable".

When I was asked to be a guest, of course I had to go check my stash aka hoard!
Instead of something from my there, I remembered that I had wanted to re-do my art tote!
and so it began...
As you can see, my art traveling bag, needed help straight  from the beginning.
When you get something at a good price, you don't always get it in your favorite colors! 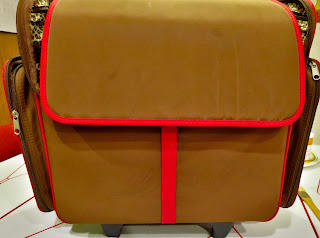 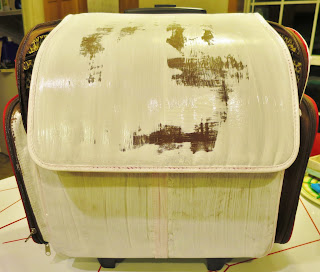 Next, my place of attack was the front bottom section.
Using Maria McGuire's Doodle It Bigger Stencil, I masked off two favorite squares.
​​ 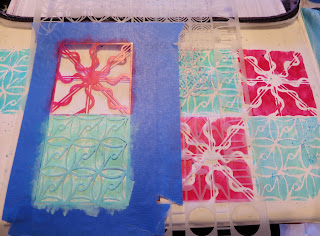 I stenciled these squares and then reversed the order and stenciled again.
In the white space that was left, I used a portion of Laurie Mika's Pilgrimage To India Stencil.
This stencil has four unique borders, so I cut it into four pieces to make it easier to use on my project. 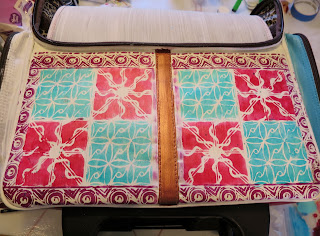 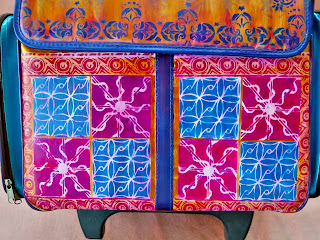 Next came the top portion.
The Elephant Parade Stencil by Natalie Kalbach was stenciled in the center of the bag.
And then the stencil part was added using Dazzling Metallics paints to make it stand out. 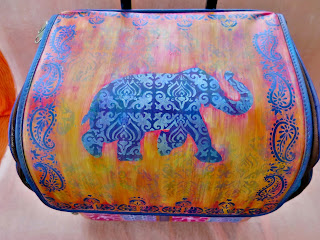 Next, I faintly stenciled the Elephant Parade around the center elephant,
as though parading across the bag. 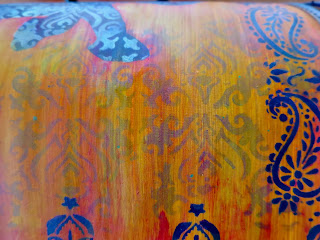 Pilgrimage To India was used again, this time the paisley border, on both sides. 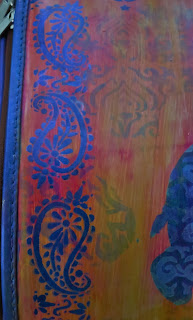 On the bottom what I did was to use one portion of the Pilgrimage To India  stencil, the border with the stars on it, on its edge... 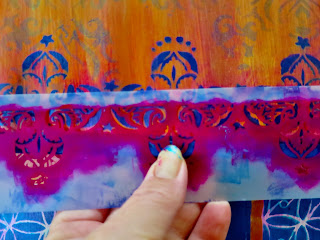 Then flipped the stencil upside down... 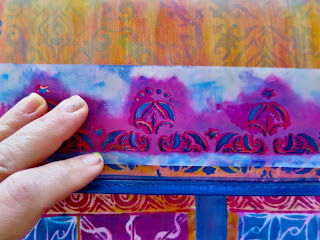 and made the stencil appear to be connected into another design. 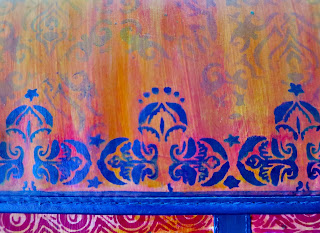 For the sides, I thought I would be clever and insert this mat to give shape to the pocket
for stenciling (note to oneself, stenciling works better without the mat.) 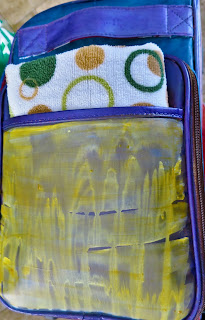 Here I used the Elephant Parade stencil and the paisley border stencil. What I did was stencil some paisleys under the mask and then change the position and stencil again with this border all the way down the inside of the elephant mask. 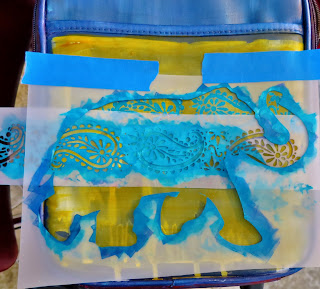 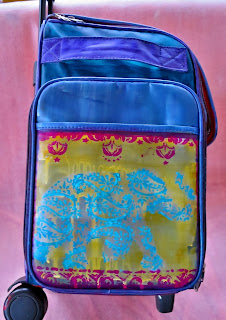 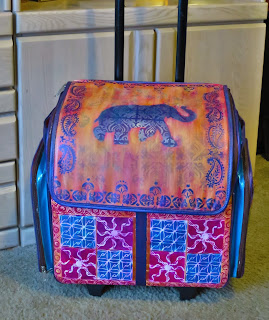 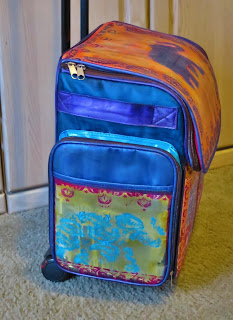 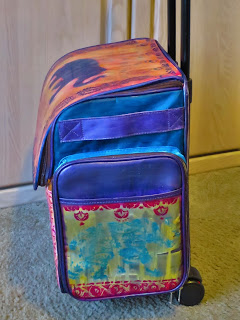 Thank you so much StencilGirl, for inviting me and thank you readers for joining me here today! Hope to see you again soon!
Jackie ")

Jackie P Neal is a self taught mixed media artist who lives in upstate New York,
on their farmette, with her husband and Golden Retriever.
Jackie gleans her inspiration from the nature that surrounds her
as well as artists across the internet and around the world.
Her favorites are texture and colors and she loves to try every and any technique. 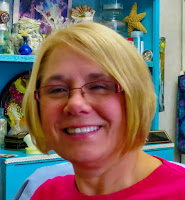 You can find Jackie on her blog:
www.Creatingwithoutcrayons-JackiePNeal.com
As well as on FaceBook
and feel free to join Jackie in her Google+ Community
Creating and Sharing Mixed Media Art
at 12:00 AM