Hi all, it's Gwen back again today with the September edition of Gwen's Gems! This month's project had a totally unexpected result; I typically work best when I have an idea of where I want to go with something, and this project was no different at the start. However as I progressed, I realized that my original vision was NOT going to work, and I ended up having to work pretty intuitively in order to finish which was very weird for me, but I really like how it turned out!

Here's what I made this month: it's a stenciled mixed media collage on a 9x12x1.5" birch panel. 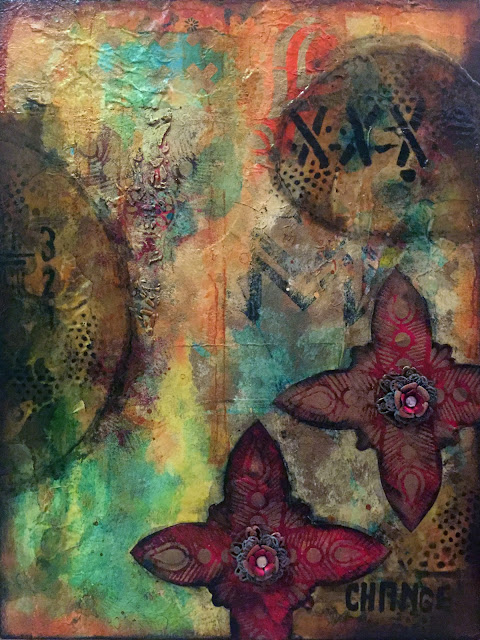 Despite the big deviation in my plans I continued to take pictures as I went, so if you're interested, here's an overview of the process I used to make this piece.

First, I pulled out some sheets and scraps of under paper (paper that I use under something else to catch stray marks or that I use to clean off brushes and stencils or test or clean stamps.) A lot of people have junk or mop-up journals where they clean off brushes, etc... but I've found that I really like to do it on loose sheets of paper and deli paper - that way, I keep building up layers until I get something cool looking, then I set it aside to save for moments like this.

On each paper I inked through a different stencil with gold pigment ink, then heat embossed with Ranger gold detail embossing powder. 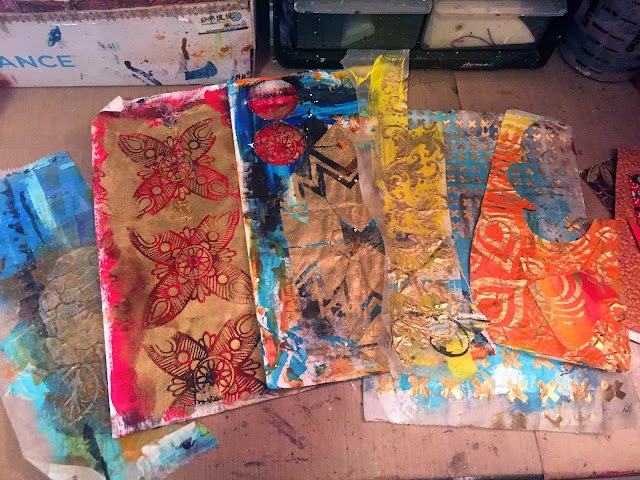 From left to right, here are the stencils I used on these sheets:
Next, I used matte medium to start collaging pieces of these papers onto my substrate - some of them wrapped around the sides as well. When that was done I started scrubbing in some paint - I used titanium white, titan buff, and nickel azo gold, eventually I also added in some quinacridone nickel azo gold. 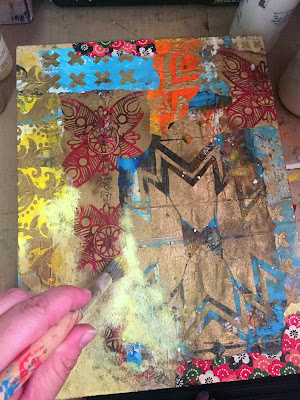 This is where things stopped going according to plan... lol. I kept feeling like I needed more paint and less pattern showing through. 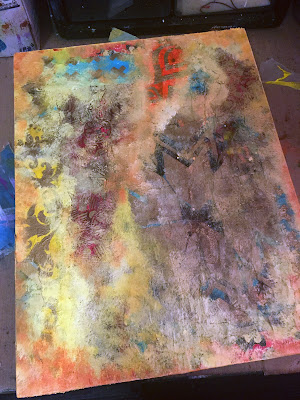 Don't get me wrong, I really liked how it looked at this stage. It's hard to see in the above photo, but because of the embossing on the collage papers, there's quite a bit of good texture here (I also let some of the deli papers wrinkle a bit as I collaged them - more texture!) I had also cleaned a bit of molding paste off of a stencil on one of these - even more texture!

At this point I realized that my original plan was NOT going to work, so I started winging it. I cut out a few images from the leftover paper where I'd stenciled my Ornamental Petals Mask and laid them on top. 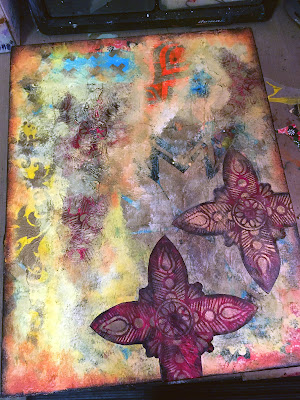 I decided to commit to that and adhered them in place. Next I felt that I needed some dimension in the center of my petal images. I thought about doing something with clay, but ended up using some metal findings to create little flowers. 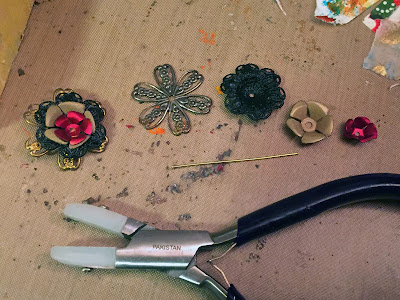 I assembled, added a jewel in the middle of each, then glued them in place with E6000. 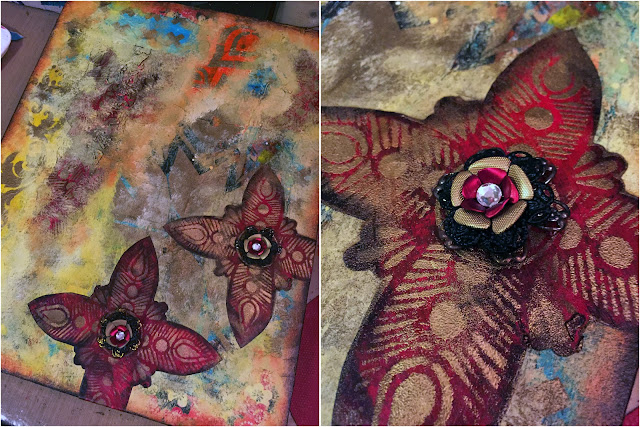 How about some drippage with acrylic inks? 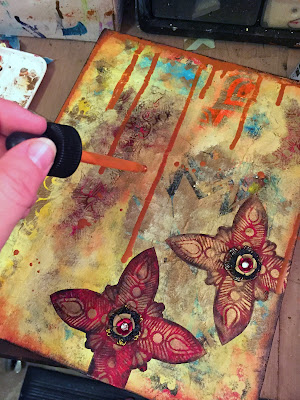 Eh... I added some turquoise ink and then used a paper towel to blend the colors into the background, but I left some of the lines from the original drips - I really liked how that looked... subtle. 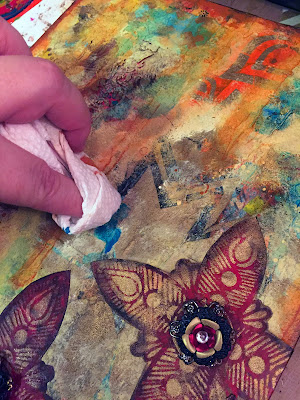 I was pretty happy at this point, but I wanted to add more, so I pulled out a few stencils by Seth Apter (Unfinished and Timeless) and masked off the sections I wanted, then added a few words and some texture elements with black Archival Ink. (I picked the word "change" from one of the stencils since it was particularly a propos for this piece.) 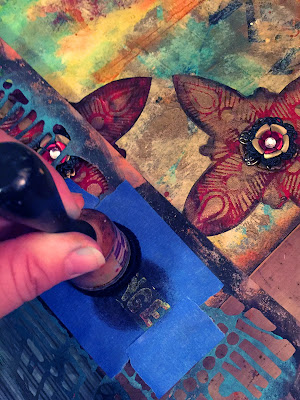 So that looked cool, but why not play some more? I mixed some pouring medium with just a small amount of a brownish glaze and poured some puddles on top of the areas where I'd stenciled the words. 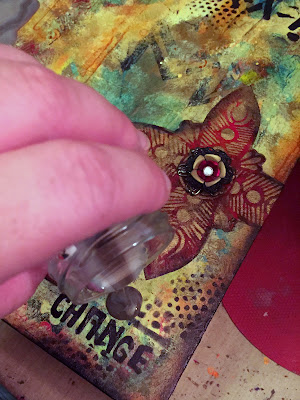 I spread the poured medium around until it was in the general shape I wanted it, then let it dry overnight. Once dry, I used a Stabilo All pencil to go around the edges, then I feathered it out with a water brush and dabbed a bit until I liked how it looked. 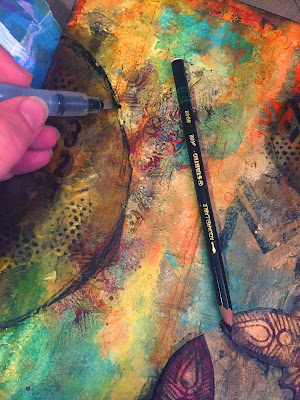 Was I done? Did it need more? (Yes... added some rust effects to my metal flowers.) I spent some time looking at it from different angles (one of my favorites is to set something on the floor and look down at it,) and finally decided that yes, I was done! Not at all what I'd originally planned, but it just goes to show that every now and then us planners need to let loose and do something intuitive! 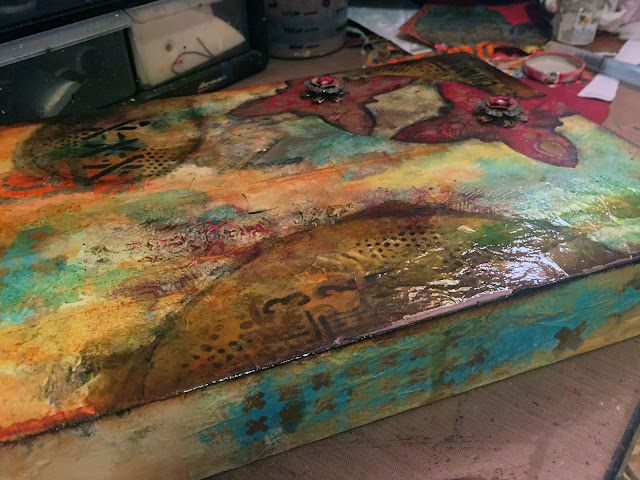 Above you can see how the poured medium gives a totally different texture and finish to areas of the piece - I like the subtle contrast and the added depth and visual interest you get.  You can also see how I continued the collage around the edges. 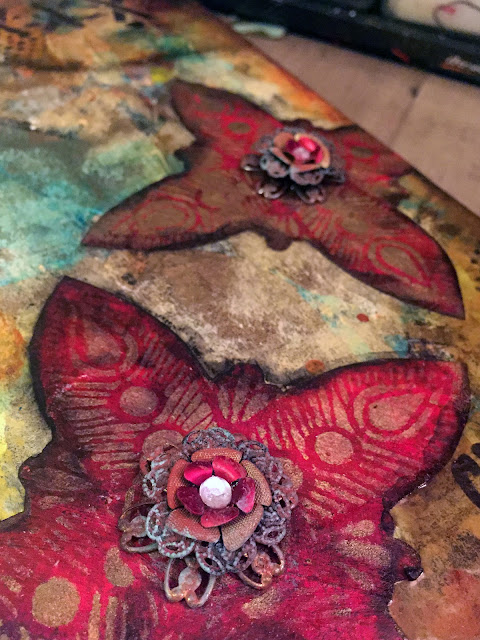 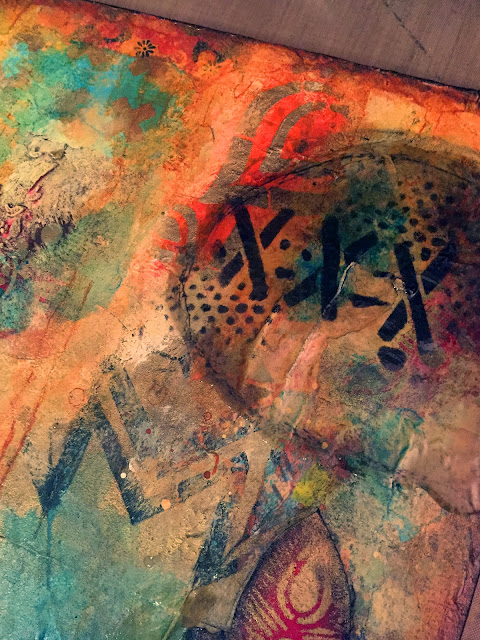 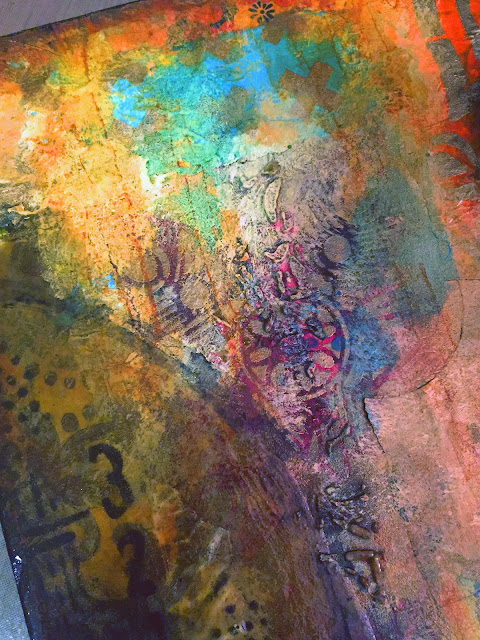 In this last photo above, you can really see some of the texture from the area where I'd cleaned some molding paste onto my under paper... I love how that worked here!

So there you go - I hope you enjoyed this month's project! My takeaway this month... sometimes I need to let go of control and just see what happens... you never know - it might be better than the original idea! If you try this process in your own art, I'd love to see how it turns out.