Hi, everyone! Laurie Jacobsen here! I am really looking forward to sharing my intense love of stencils and my art project with you! I find that stencils can really be a great way to “un-white” a canvas or piece of paper. So, if I’m ever feeling like I don’t know how to start, I will grab a stencil and go for it.

This piece began in just that way — twice! I started with a white piece of paper and a number 2 pencil and drew inside the lines of a Jennifer Evans stencil called, Abstract Grid. I decided that I wanted to add some stitching to some of the sections, so I took some Mars Black acrylic paint and painted in those sections.

Once dry, I took some embroidery thread and “made marks” with the thread. I LOVE using thread as a part of my mixed media paintings. 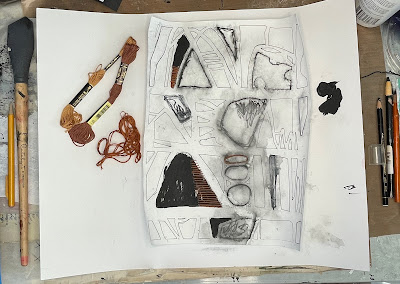 I made lines in one, filled in part of a section in another, and outlined another. I decided that I am going to use those pieces as collage for the piece, so I tore them from the full sheet.

Next I added white gesso to the framed cradled wooden substrate that I’m using for my piece.

I decided to “un-white” the wood board using stencils and my Burnt Sienna spray paint that I love almost as much as I love my husband! (I totally have a palette and it’s very neutral, Black, White, Burnt Sienna, Titan Buff, Yellow Ochre and sometimes I throw another color in if I’m feeling particularly frisky!) I used two different stencils for this part. One is Letter Mania by Suzi Dennis. This stencil is a particular favorite of mine and I have used it in dozens of pieces. The abstract word/not word-ness of it really intrigues me. The other is Soulful Scribbles by Traci Bautista. 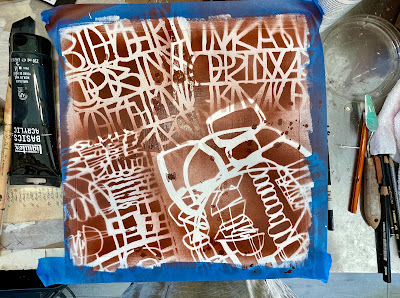 I love to use stencils to create collage pieces, so I used Letter Mania and Abstract Grid on some book pages to be able to add them. I love layering stencils in this way. Using the same stencils over and over in different ways in the same piece intrigues me. I always love the results. 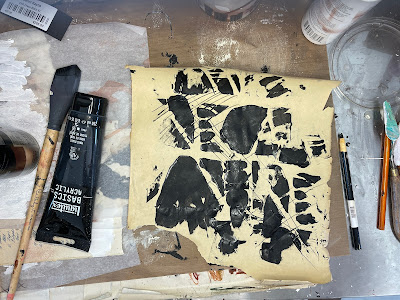 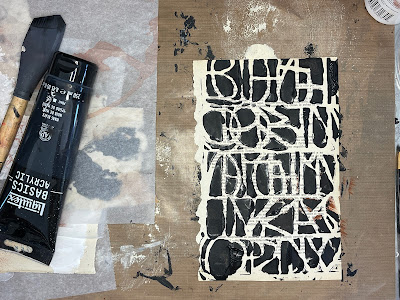 Next I gathered some other collage materials: I have an old card catalog card, a percolator filter and a teabag, both are round, the pieces that I made with stencils and another mini piece that I cut from a larger paper piece. On that piece is a tiny bit of Travel Note Mini by Rae Missigman — another favorite that I use all the time! I also printed out a piece of my collage paper to add into the mix! 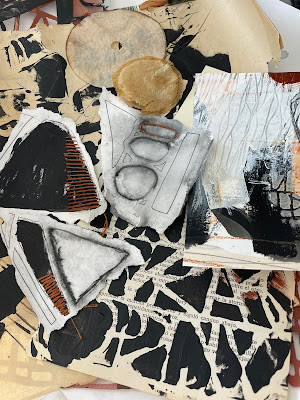 I glued some of the collage pieces directly onto the board — two of them were the pieces that had I had stenciled especially for this project.

Next I added some acrylic Burnt Sienna paint to the piece. I wanted to use the same color as the background to blend the stencil in a bit. I also used it to push a couple of the collage pieces back. Then I layered Mars Black acrylic paint on top — mostly around one of the pieces of stenciled collage. 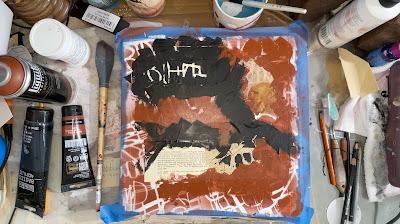 For my next layer, I picked up Soulful Scribbles and used it to stencil Yellow Ochre acrylic paint onto the bottom right corner, which had that stencil directly on the wood panel and a piece of collage paper that I had created using that same stencil…so three layers of the same stencil. I can’t explain why I LOVE doing that so much, but I really do — different colors, different, substrates, different media, same stencil — so, so good.

I used Abstract Grid next with the Yellow Ochre paint to paint out the same part of the stencil as I had used in the first collage to create a piece that I used the embroidery thread on. I did that with the idea that I would layer that piece over top of what I was doing in this part.

For the next layer, I took the piece of collage paper of mine that I printed, cut two parts of it out and glued those down. I also glued down one of the pieces of collage that I added stitching to. 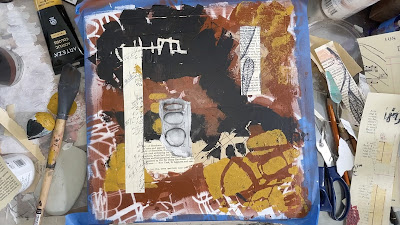 Because I felt it was getting a little dark, I pressed some bubble wrap painted with Titan Buff Paint to the piece and then some more with with my catalyst blade.

I then used Letter Mania to add some more Titan Buff Paint to continue brightening the piece and incorporate the collage pieces.

My next layer is about adding the collage pieces that I did stitching on! I was so excited with how they came out and how they look on the piece!! I am reflecting on all of the ways in which I’ve used stencils and all of the different layers that have stencils on them. I love that depth and repetition. 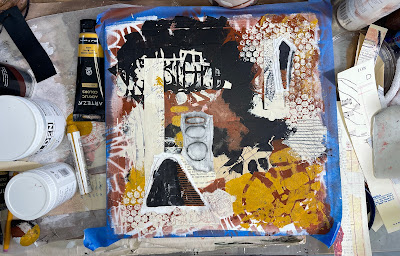 I took the Titan Buff paint and finger painted around the collage pieces to help incorporate them into the piece. 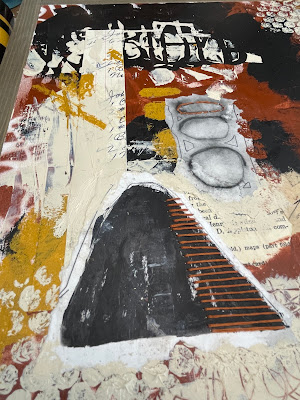 Once I took the tape off and sat with the piece for a while, I decided to add some finishing touches. I use some buff-colored pastel on the white part around the pieces that have embroidery floss. It felt a little too bright white, as it was the only white on the canvas. Then I finished the piece off with some mark making with my black Posca pen, a Burnt Sienna pastel, another piece of collage paper using the Letter Mania stencil, and a little more Mars Black paint. 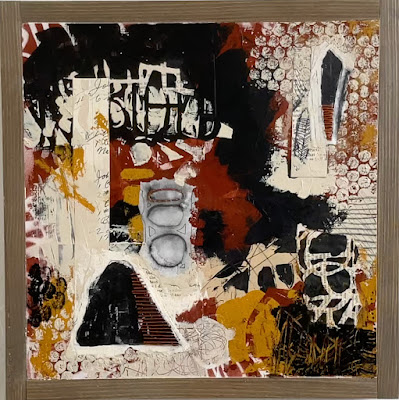 Thanks for following my journey to creating this piece of art! 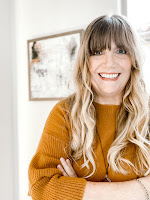